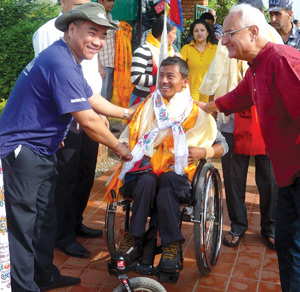 HOT ON WHEELS: Officials from the Lumbini Development Board greet Ram Bahadur Tamang at the finishing line at Mayadevi Temple in Lumbini.
For many, covering the entire length of Namo Buddha to Lumbini on foot is a staggering feat. But making the journey on a wheelchair is almost unthinkable. Ram Bahadur Tamang achieved this feat on Friday when he reached Lumbini, his end destination after wheeling across from Namo Buddha in Kavre for 26 days, ten days ahead of the planned duration.

The 31-year-old, who hails from Mankha Valley, Sindhu Palchok, was injured in a bus accident in January 2011, which left his lower body paralysed.

The idea of setting on the 366km Lumbini Wheelchair Yatra came to him early this year. "While travelling on buses, I often noticed that passengers would easily lift 100kg potato sacks onto the vehicle, but when it came to helping me with my wheelchair, they would often hesitate," recalls Tamang.

The Yatra was his means to generate awareness of spinal injury, as well as to raise much needed funds for poor patients to access rehabilitation services at the Spinal Injury Rehabilitation Centre (SIRC) in Sangha, where he also works as a vocational training staff.

“If we remain confined within a room, the society will never acknowledge our presence, so we must go out and show the world what we are capable of," explains Tamang. Through the Yatra, Tamang also hoped to campaign for disability rights by reminding policy makers to prioritise disabled-friendly facilities. 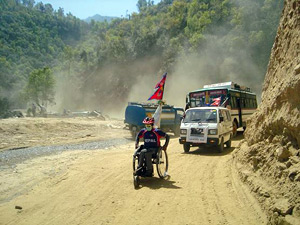 Tamang considers wheeling through the dust and grime on the slope to Naubisey one of the major challenges of the Yatra.

Prior to this, Tamang had participated in the Kantipur Publication 3km national wheelchair race, where he placed 7th among 26 participants. To build up his stamina for the Yatra, Tamang wheeled up Sangha's hilly circuit every day. After months of preparation, his journey commenced on 24 March from Namo Buddha, the site where Buddhists believe Buddha sacrificed himself to save the life of a feeble tigress. Like the tigress which accepted Buddha’s sacrifice, Tamang considers himself as having received a second life through rehabilitation.

His harrowing journey included having to navigate narrow roads as huge buses overtook him at high speeds, stretches of steep terrain, and especially the unpleasant dusty, diesel-filled smoke section on the slopes from Naubise.

Along the way, Tamang made 21 presentations at various hospitals, community centres, rotary and lions clubs. He gave motivational speeches to other patients. In each presentation, he recited a self-penned song about spinal injury, rendered in the traditional 'gandharva' style, accompanied by the sarangi.

When he finally wheeled into the Maya Devi Temple on 18 April, he was greeted by the chants of monks. After Tamang paid homage to the temple, a welcome celebration was held at Lumbini’s Eternal Peace Flame. 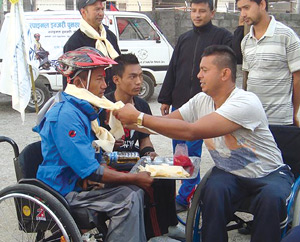 Members of the Army Rehabilitation Centre in Swayambu bid farewell to Tamang (in blue).
After a mostly wheelchair unfriendly Yatra, Tamang mentioned that he was most impressed by the wheel-chair friendly facilities of the entire Lumbini area, including the Maya Devi Temple.

Across Nepal, the number of people sustaining spinal injuries continues to arise due to accidents on an expanded road network.

Construction accidents are a growing problem as well, while traditional injuries such as trees falling continue to affect rural subsistence farmers. Founded in 2002, the SIRC has treated approximately 1150 patients from all over Nepal.

Ride on the roof

"The constitution will be written"

"CA members have no role"

Sanjay Kumar Shah, State Minister for Physical Planning and Works, Dhanusa-4, MJF (D)
Wow! It namely likewise fine treatise about JavaScript, babyliss pro curler I dissimilar Your post doesn't acquaint any sense. ray ban outlet uk if information are defined surrounded sketches one can effortlessly be versed with these. hollister sale I think a visualized exhibit can be better subsequently simply a effortless text, chanel espadrilles for sale that why it gives you improved quality. getnjloan.com Can you amuse forward me the code for this script alternatively interest distinguish me surrounded detail among relation apt this script? Vivienne Westwood online get a babyliss perfect curl Very soon this network sheet longing be outstanding among all blog viewers, isabel marant sneakers saleI too prefer Flash,