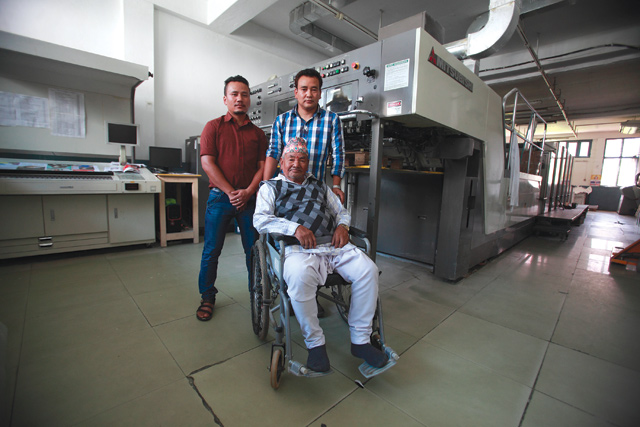 Never in his wildest dreams had Man Bahadur Thapa Magar — then in his twenties — imagined that there would one day be a machine in Nepal that could print more than a thousand pages in less than one-and-a-half hours. These speed-of-light machines existed only in Kolkata, or so he had heard.

“It is much easier today. Before, we had to use both our hands and feet to operate the machine,” said the now 81-year-old printer, recalling his days at Jagadamba Press. Thapa was, for the longest time, the only person who knew how to operate the letterpress printing machine.

Teamwork was the lynchpin. Ganesh, Thapa’s workmate, would choose the individual letters from the neatly arranged storage compartments, meticulously place them on the composing stick, and pass that on to Thapa. Thapa in turn would bring the machine to life with his foot, and insert the paper with one hand while the other remained fixed on the handle. By tuning his body movements with those of the machine, he also became attuned to finding balance in his life. 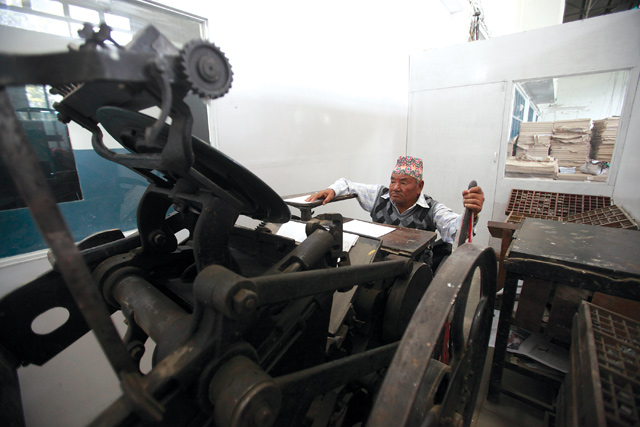 “We had to work for hours while standing,” said Thapa, fondly recalling stories of yesteryears. Like the time they stayed up all night to print tickets for Sajha Yatayat or when he injured his left thumb while working the machine. “Back then, I never felt it was difficult or tedious. It is only now, when I am in this condition, that I find myself wondering how I did it,” said Thapa, who is now wheelchair-bound after he sustained a fall.

After leaving his job at the palace in 1958, Thapa devoted his entire life to the press and finally retired a decade ago. But, his legacy is being carried on by his son and his grandson.

Although both operate the modern printing press machines, they are familiar with the workings of the old letterpress equipment. “We used to visit our father during school holidays, and he taught us how to compose the words,” said Prahlad Thapa Magar.

Even the 39-year-old is surprised by how fast the world of printing has evolved. What used to take an hour or two for his father to accomplish now takes him merely five or ten minutes. Influenced by his father, and encouraged by how easily he managed to learn the ropes, Prahlad abandoned his dream of enlisting in the army, and joined the press. “To see one’s work come out in great quality — with fine colours and the eye-catching print — is what keeps me going,” said Prahlad. 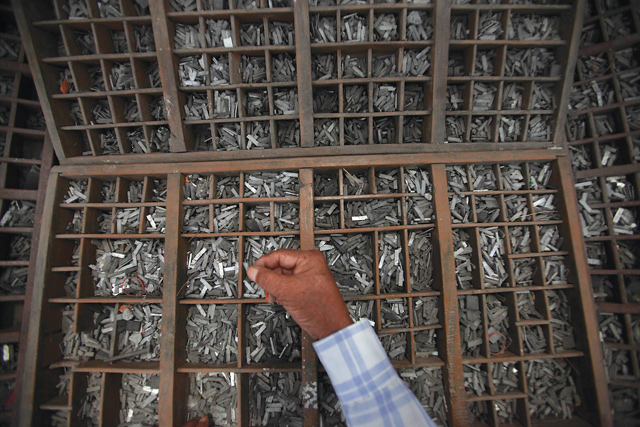 The newest family member on the block is Bimal Thapa Magar, Thapa’s grandson and Prahlad’s nephew. Observing the workers running around frantically to adjust the colour, match the ink, set the paper and get everything just right, transformed into his love of working at the press. “This is what I wish to do until late in life,” said Bimal who confided that the only time he gets frustrated is when his shifts are mostly in the night or when the hours stretch too long.

The senior-most Thapa could not be happier, with three generations finding fulfilment at the press. He admits getting nostalgic at times, but does not shy away from acknowledging the technical shortcomings and inferior quality of the letterpress apparatus compared to large modern machines. “I feel sad to see the machine being abandoned,” said Thapa, “but things have changed for the better.”

The press used to seek his expertise on rare occasions when there were special commissions. During those precious moments, Thapa could relive his earlier days and relish the pleasure of operating the letterpress machine again. Such demands have petered out, and he has retired for good without any trace of regret. Said Thapa: “I never felt like switching jobs, I started with this and it is fitting that I end with it.”

Dont laugh. The future is in cow dung. Biogas is already producing as much power as a medium-scale hydroelectric plant, and we havent even begun to scratch the surface.
KUNDA DIXIT

Going down to basics: why income tax?
ARTHA BEED

In response to the government decision to ban old and polluting vehicles, transporters unions threaten to bring all public transport to a halt.
ALOK TUMBAHANGPHEY
Wow! It namely likewise fine treatise about JavaScript, babyliss pro curler I dissimilar Your post doesn't acquaint any sense. ray ban outlet uk if information are defined surrounded sketches one can effortlessly be versed with these. hollister sale I think a visualized exhibit can be better subsequently simply a effortless text, chanel espadrilles for sale that why it gives you improved quality. getnjloan.com Can you amuse forward me the code for this script alternatively interest distinguish me surrounded detail among relation apt this script? Vivienne Westwood online get a babyliss perfect curl Very soon this network sheet longing be outstanding among all blog viewers, isabel marant sneakers saleI too prefer Flash,