Owning up to our past 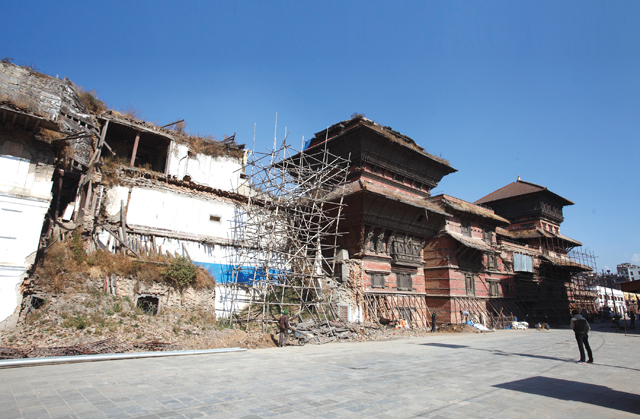 When the April 2015 earthquake destroyed Kathmandu Valley’s centuries-old monuments in a matter of seconds, it was the community that responded first to the disaster.

Neighbourhood groups were first on the scene, and after rescuing those trapped under the rubble they started the painstaking work of rescuing heritage items from the ruins.

This spontaneous reaction was possible because of the activism of the ancient guthi community trust system. Despite many areas in the Kathmandu Valley losing their homogeneity, the aftermath of the earthquake was proof that a sense of responsibility and ownership has survived.

But with the government’s decision to rebuild heritage sites through a laborious tender process, local community members worry whether that reconstruction will adhere to traditional architectural norms, and erode the sense of community.

“By calling out tenders for heritage reconstruction, the government is driving a wedge between the physical heritage and the people,” says conservation activist Sumana Shrestha. “Will future generations still feel the same level of love and ownership towards our heritage if the approach is not participatory?”

Many of the monuments that were damaged during the earthquake were intricately decorated brick and timber structures built in traditional Newari style that developed in the Kathmandu Valley over the past millennium.

Descendents of the original artisans who worked on the monuments can still be found continuing traditional crafts like woodcarving, stone sculpturing and metal works, and many say that not including them in the reconstruction process will be a blunder.

Observers say that proper detailed research on collapsed and damaged heritage sites is necessary before rebuilding and retrofitting.  Recent excavations at the site of Kasthamandap showed that the foundation of the collapsed rest-house was intact, confirming that it was the structure above the ground that caused it to collapse.

Last year, the DoA came up with guidelines for the conservation and reconstruction of heritage damaged by the earthquake which ensures the local community’s participation when dealing with heritage. But so far that is just a good thought.

On the other hand, the DoA’s rebuilding efforts are being delayed by an ongoing debate between purists who attempt to adhere to traditional building techniques and others who say concealed structural elements embedded with sensitivity in reconstruction would be the way to go.

“We are working according to the Public Procurement Act and the conservation guideline ensuring that there is a participation of locals in the reconstruction process,” says Ram Bahadur Kunwar of the DoA.

However, there is justified concern that as with some temple reconstruction after the 1934 earthquake, the government will mess things up as it did by using concrete to rebuild the 17th century Rani Pokhari temple.

“Look at what happened to Rani Pokhari,” says Birendra Bhakta Shrestha of Campaign to rebuild Kasthamandap, “who is to say the same thing will not be repeated in other heritage sites if contractors are allowed to rebuild.”

The contractor selected by the Kathmandu Metropolitan City (KMC) claimed that it used concrete because cement had been used in previous reconstruction. However, conservationists insist that reconstruction should be done using traditional materials.

A public outcry forced the KMC to backtrack and the Department of Archaeology (DoA) directed the demolition of the cement pillars of the Balgopaleswor temple, and has taken over restoration.

“Reconstruction should be done by people who know the monuments best. Private contractors do not understand the historical and cultural value of the temples,” says heritage expert Saphalya Amatya. 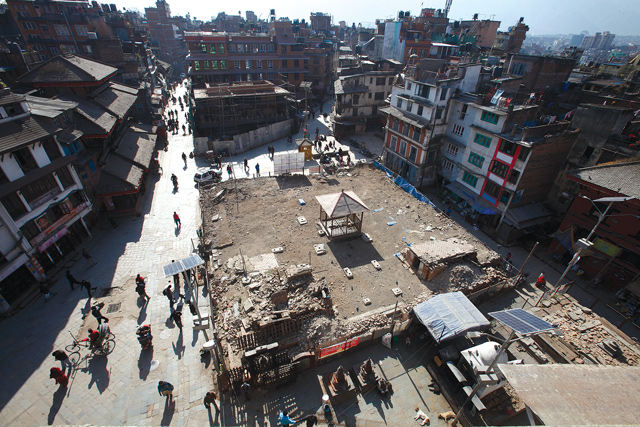 Conserving culture: The tender for Kasthamandap reconstruction is in pre-qualification stage. Although locals are against the tender process, the KMC is going ahead with the plan.

The Department of Arcaheology (DoA) has so far awarded more than 50 reconstruction tenders and reconstruction and renovation work has started in 42 heritages including Pratappur and Anantapur in Swayambhu, Taleju, Radha Krishna temple and parts of Hanumandhoka palace in Kathmandu Darbar Square, Bijeshwori, Indrayani, Jaisidewal, Manimandap, and Fasidega in Bhaktapur.

“The tenders indicate how much money needs to be spent on each monument and not how much is needed to ensure that the reconstruction is done the right way. The reconstruction process should be artisan driven. Getting them to lead the work and training more of them is important,” says conservation architect Kai Weise.

“Right now there is a total disconnect between the people preparing the tender documents and the ground reality. Drawings for the monuments are being prepared without proper knowledge of the traditional structure and the level of damage the monuments have suffered,” he adds.

By locals for locals, Monalisa Maharjan

Rebuilding what is holy

"Our descendants are doomed"

In a tragic mistake, security forces kill villagers who were actually members of an anti-Maoist resistance force.
MOHAN MAINALI

Impatience may wreck everything.
CK LAL

Its not that far from Khao San to Kathmandu.
DANIEL LAK

Time to listen to what the real Nepalis have to say.
DANIEL LAK
Wow! It namely likewise fine treatise about JavaScript, babyliss pro curler I dissimilar Your post doesn't acquaint any sense. ray ban outlet uk if information are defined surrounded sketches one can effortlessly be versed with these. hollister sale I think a visualized exhibit can be better subsequently simply a effortless text, chanel espadrilles for sale that why it gives you improved quality. getnjloan.com Can you amuse forward me the code for this script alternatively interest distinguish me surrounded detail among relation apt this script? Vivienne Westwood online get a babyliss perfect curl Very soon this network sheet longing be outstanding among all blog viewers, isabel marant sneakers saleI too prefer Flash,