On course to be champion

Pratima Sherpa literally grew up on a golf course and wants to be Nepal’s first female professional golfer.
Sahina Shrestha 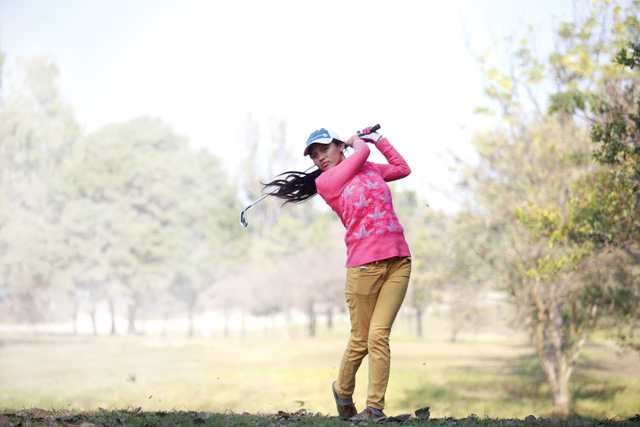 The tranquility of the Royal Nepal Golf Club next to the chaos of Kathmandu Airport is what Pratima Sherpa calls home. She was born and raised in a maintenance shed near the fourth hole of the golf course where her parents work. Exposed to golf from an early age, the 17-year-old grew up watching club members play.

She mimicked their movements with wooden sticks, and was just 10 when a club member spotted her and invited her to hit with real golf putters. Coached by Sachin Bhattarai, Sherpa started practicing weekly, and won her first trophy in a junior chipping competition two months after being initiated into the game. She is now Nepal’s top-ranked female golfer and hopes to soon become the first female golf professional in Nepal.

“The whole process of planning, picking the right club and calculating where the ball might end up is stimulating,” says Sherpa. “It is really exciting to watch the ball travel when you make a long shot.”

A shelf in her home brims with trophies she has won over the years. In May, she won the female division of Carlsberg Classic Golf Tournament and in September was placed second in the Faldo Series Nepal Championship, a global amateur series for boys and girls in more than 30 countries around the world.

The winners from the Nepal Championship which sees participation from golfers in India, Italy and Bhutan are rewarded with a ticket to play in a tournament in Mission Hills, China. Sherpa has won championships in 2012 and 2015, but is yet to play in an international arena.

“Pratima has the makings of a winner, she is dedicated, disciplined and diligent. She never misses practice and not only does she know her shortcomings but works hard to improve,” says Bhattarai, who thinks this gives her an edge in a game that depends as much on the equipment as passion, planning and skill.

Sherpa’s favourite golfer is Tiger Woods, and she credits her success to encouragement from her parents, her coach and all others who helped her over the years with equipment and scholarships.

In pursuit of her dream, the hardworking 12th grade student is not leaving anything to chance. Her days begin at 5am by taking care of the chicken her family keeps for extra income. Then she finishes her school homework. But by 7am she is at the golf course practicing for at least two hours before heading to college.

Four days a week she has practice sessions with her coach and is back at the course every chance she gets. She is currently preparing for pre-qualifier matches to get a pro-card. Although the dates are yet to be fixed, Sherpa has her eyes firmly fixed on her goal of professional golf.

“The plan is to keep the pro card on hold so that she can play more amateur tournaments, which take place more frequently, to work on her game,” says Bhattarai. After college Sherpa wants to dedicate at least six months to honing her golfing skills. For her undergraduate level she wants to study Golf Management to bridge the gap in Nepal’s golf scene and improve the overall quality of the game in the country.

Says Sherpa: “There aren’t many female golfers in Nepal. I want to play in the international arena and show the world that there are Nepali female golfers who are on par with everyone else. I want to urge my friends to return to the game and other girls to give golf a shot.”

As the Nepal-India trade treaty comes up for renewal, business on both sides wants it to stay in place-with a few safeguards.
BINOD BHATTARAI
Wow! It namely likewise fine treatise about JavaScript, babyliss pro curler I dissimilar Your post doesn't acquaint any sense. ray ban outlet uk if information are defined surrounded sketches one can effortlessly be versed with these. hollister sale I think a visualized exhibit can be better subsequently simply a effortless text, chanel espadrilles for sale that why it gives you improved quality. getnjloan.com Can you amuse forward me the code for this script alternatively interest distinguish me surrounded detail among relation apt this script? Vivienne Westwood online get a babyliss perfect curl Very soon this network sheet longing be outstanding among all blog viewers, isabel marant sneakers saleI too prefer Flash,