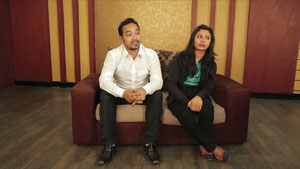 Yellow Nepal developers Anish Shrestha and Manisha Karmacharya
Anish Shrestha created his first start-up, Nep Jilla, when he was in college at 22. Although the software company didn’t do as well as expected, its failure was a lesson in business management for the computer engineer.

In May this year, Anish got along with his friend Manisha Karmacharya to develop Yellow Nepal, a discovery app which helps users find restaurants and food deals in Kathmandu. The app is among the top nine to be shortlisted by Google for its Business Group’s Stories Challenge.

“It’s not a revolutionary concept but one that people can use to save time and hassle of choosing a restaurant,” says Shrestha. Yellow Nepal has been download 4000 times. The app was developed with the idea of helping both restaurant owners and patrons. But, the developers (pic, above) found it hard to convince restaurant owners the benefit of being listed on the app.

“Some restaurant owners didn’t understand how the app could help them to get clients,” says Manisha. Of the 8000 restaurants in the city, so far only 1000 are registered with Yellow Nepal. 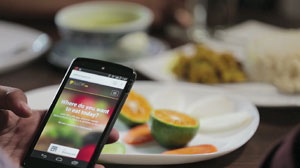 So, when the duo submitted their project for the Google Business Group’s Stories Challenge just three months after the app was developed, they didn’t expect at all to move past the first round. But, they did. After being selected for the semi finals, Yellow Nepal was shortlisted along with apps from Philippnes, Sri Lanka, Mexico, Senegal and Uganda feature as the finalists of the contest.

The winning app will now be chosen based on the number of likes on their YouTube presentation and receive $5000 in cash from Google.

“This is an excellent platform for us to promote our app and Nepali developers as a whole,” says Anish. Encouraged by their performance at the contest, both founders now want to take the app global.

For now, Yellow Nepal is available only on Android and allows users to locate and review restaurants. The team is working on its development for iPhone and are thinking about the gamification of the app. Anish and Manisha also wish to list restaurants of other cities in the country.

Says Anish: “We did get the opportunity to develop in Bangladesh but we felt we should prioritise establishing ourselves in Nepal before venturing out.”

To vote for Yellow Nepal, go to GBG Stories Challenge. Votes are open till 15 December 2014.

Who is Prachanda leading?

"The government is lying"

No pain, no gain

Lets face it: foreign aid is not a partnership. There are only givers and takers.
PITAMBAR SHARMA

Mutu maathi dhunga raakhi hasnu parya chha.
CK LAL
Wow! It namely likewise fine treatise about JavaScript, babyliss pro curler I dissimilar Your post doesn't acquaint any sense. ray ban outlet uk if information are defined surrounded sketches one can effortlessly be versed with these. hollister sale I think a visualized exhibit can be better subsequently simply a effortless text, chanel espadrilles for sale that why it gives you improved quality. getnjloan.com Can you amuse forward me the code for this script alternatively interest distinguish me surrounded detail among relation apt this script? Vivienne Westwood online get a babyliss perfect curl Very soon this network sheet longing be outstanding among all blog viewers, isabel marant sneakers saleI too prefer Flash,