A much older tomorrow

Nepal’s population is ageing rapidly, so today’s children must be better equipped to take care of the elderly and develop the country when they grow up
Sonia Awale 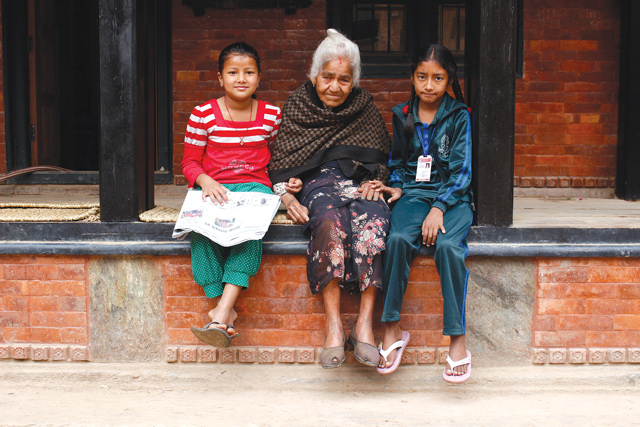 Nepalis are living longer and parents are having fewer babies, more of whom survive than ever before. This demographic transition is good news, but it also means that today’s children must be better able to take care of a larger population of elderly people in the future.

Today, about 12 working-age individuals support one ageing person in Nepal. That ratio will drop to 5.6 by 2050. Today’s children must therefore be raised to become far more productive than today’s adults by the time they grow up, according to a report launched recently by the National Planning Commission, UNICEF and the Population Council.

The report, Study on Demographic Changes in Nepal: Trends and Policy Implications, predicts that by 2028, Nepal will be an ‘ageing society’ where 7 per cent of the population is above 65. That figure will double by 2054, making Nepal an ‘aged’ society. The speed of ageing will be much faster than in countries like France (115 years), UK (47 years) or Germany (40 years).

“Nepal’s transition from an ageing to an aged society is similar to Japan. This means Nepal has a very short time to prepare itself to adequately take care of a rapidly growing old population, and simultaneously continue to develop the country,” said Tomoo Hozumi, UNICEF Nepal Representative.

Tomoo adds that unlike Nepal, Japan was already a developed economy when that transition happened. Nepal is also in a ‘demographic window of opportunity’ – a period when the proportion of the working-age population is higher than the young and elderly dependents. This provides a time-bound opportunity for accelerated economic growth, and with fewer children the country can invest more in their development. The challenge is that all this needs to be done in the next 30 years.

Nepal’s fertility rate has declined from 5.6 per woman in the 1980s to 2.3 today, and it is falling. The crude death rate has more than halved and life expectancy has increased by more than 20 years since the 1980s.

“Nepal already looks like an advanced society because our demographic transition has progressed in a very non-traditional manner in a significantly short time and at a relatively low level of development,” explained Ashish Bajracharya of the Population Council.

All this is impressive and good for the country. But experts like Hozumi and Bajracharya (see interviews) emphasise that a rapidly ageing population and a finite demographic window of opportunity also bring new challenges. Old-age dependency in Nepal is growing and will continue to rise, which means increasingly fewer people to look after larger numbers of older people. Unless younger Nepalis are raised to become much more productive, earn more and pay more taxes, the country could face a crisis.

“It is not about the number of children but about whether they are raised healthy and intellectually more capable so that they become equal to these challenges,” explains Hozumi.

Nepal’s laws need to be made elderly friendly. Currently there are almost no special provisions for the healthcare of older people. Migration and nucleating families means the elderly population is losing its traditional support base. The migration of Nepal’s working-age population also means they are not directly contributing to Nepal when the country has limited time to take advantage of the demographic window of opportunity.

“As people grow older, the problem of social security increases: the government has to come up with necessary care and resources. But as more people age, the focus of healthcare will have to change and the elderly should have separate provisions for geriatric care,” says demographer Pitamber Sharma.

Nepal’s demographic transition still gives us a 30-year window of opportunity, which means we have till 2047 to prepare for an ageing society and reap the demographic dividend – the period when working-age adults outnumber dependents.

Krishna Murari Gautam, founder of the group Ageing Nepal, says young Nepalis need to be aware about what awaits them in future as they age, and to have backup systems in place if the government cannot cope with elderly care (see Guest Editorial).

UNICEF’s Hozumi concludes: “We need to urgently invest in children and their education, health and development on a priority basis. By the time they grow up, the responsibility of young Nepalis taking care of the elderly while simultaneously developing the country will increase exponentially. We need to invest in their growth so that they are capable of doing so.” 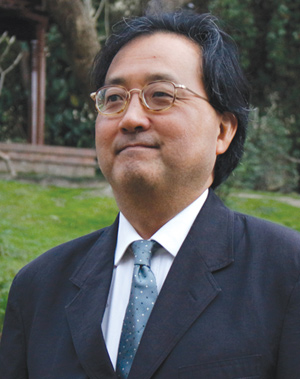 Nepal has a demographic window of opportunity of another 30 years. In this period Nepal has to give priority to children, on their development, health and social protection.

Children are a source of development and growth. How they are raised in terms of health and education has a direct bearing on how productive they can be when they grow into adults.

Japan’s response to ageing was too little, too late. Nepal’s democratic transition is happening 30 years behind Japan.

I don’t want other countries to make the same mistakes we made in Japan.  It is a matter of political will. 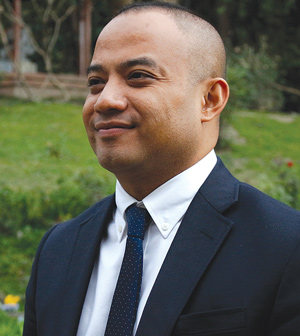 The window of opportunity for rapid economic growth opens when a country has a smaller dependent population. But that is an opportunity only if social and economic policies are right and there is correct investment.

We are ageing fast and we need to ensure that our policies are cognizant of this issue.

Investing in early childhood development is the most cost-effective strategic intervention to address an ageing population. A focus on equity and justice is not just a matter of social justice but actually smart policy and economics.

We can extend the demographic window of opportunity by a number of years if we can delay age at marriage and subsequently delay first birth. 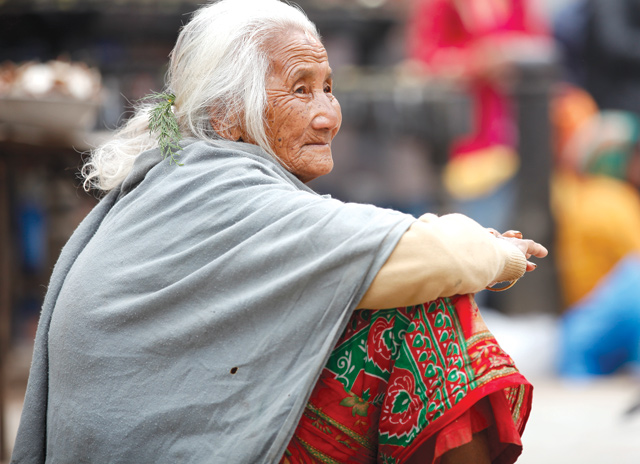 Nearly half the young men in Nepal have left the country for work or study. One in every five children has one or both parents out of the country. Twelve per cent of Nepalis above 60 live alone. What these numbers suggest is that the country’s senior citizens are losing their traditional support system in their old age. Families also do not live jointly and working couples move away, leaving elderly parents alone and vulnerable.

“Senior citizens have no family care, no social security and no retirement plan, and ageing itself has become a disability: the loneliness needs care and attention,” explains Pramila Bajracharya Thapa of The Hope Hermitage, a elderly day care centre in Lazimpat.

As Nepal’s population ages without a social safety net, senior citizen homes and care centres have sprung up in recent years. But there is still a social stigma attached to families who send their parents to shelters.

“Our culture expects the son to take care of parents in their old age, and those who send them to senior citizen homes are ostracised for abandoning their family,” explained Krishna Murari Gautam of the organisation Ageing Nepal, who gave up his attempt to set up a geriatric home because of the stigma. He says old people’s homes are considered charities for the old and poor. (see Guest Editorial, page 2) There has also been rise in the cases of children abandoning their parents at old age homes.

In Nepal and worldwide, people are living longer, but not healthier. Terminal illnesses and neurodegenerative diseases are replacing infectious illnesses, even in developing countries. There were 78,000 cases of dementia in Nepal in 2015, and this is projected to rise to 134,000 in the next 13 years and to 285,000 by 2050.

“Alzheimer’s and dementia are misunderstood in Nepal,” says Thapa, adding that the illnesses are treated as a form of madness. Families fear the stigma, and hide their relatives instead of seeking treatment.

In a country where mental health care has always been neglected despite a staggering 37.4 per cent of the total population suffering from some form of psychiatric disorder, treatment of the mental health of the elderly is almost non-existent.

“Government should set up care centres catering specifically to the needs of dementia patients, because their cases are more severe than those of other elderly people,” says Thapa.

While Nepal exports geriatric caregivers to Israel and other countries, there is a shortage of trained personnel at home. Thapa couldn’t find nurses for her centre so she hired unemployed young women, whom she trained in elderly care.

Hope Hermitage Nepal conducts 10-day trainings and produces qualified caregivers, many of whom are working in Kathmandu's 36 senior citizen homes or with individual families.

Says Thapa: “I’m at least assured that some elderly people are getting proper care. It has also helped empower women who would have been jobless otherwise.”

"The House can do anything."

Subash Nembang, Speaker of the House of Representatives, in Budhabar, 18 May

Chandra Bhandari in Himal Khabarpatrika, 15-29 May

Editorial in Kantipur, 6 May
Wow! It namely likewise fine treatise about JavaScript, babyliss pro curler I dissimilar Your post doesn't acquaint any sense. ray ban outlet uk if information are defined surrounded sketches one can effortlessly be versed with these. hollister sale I think a visualized exhibit can be better subsequently simply a effortless text, chanel espadrilles for sale that why it gives you improved quality. getnjloan.com Can you amuse forward me the code for this script alternatively interest distinguish me surrounded detail among relation apt this script? Vivienne Westwood online get a babyliss perfect curl Very soon this network sheet longing be outstanding among all blog viewers, isabel marant sneakers saleI too prefer Flash,