Fifty nine-year-old Dil Kumar Barahi comes from a family of carpenters, and owns a workshop in Kuti Saugal, Lalitpur. 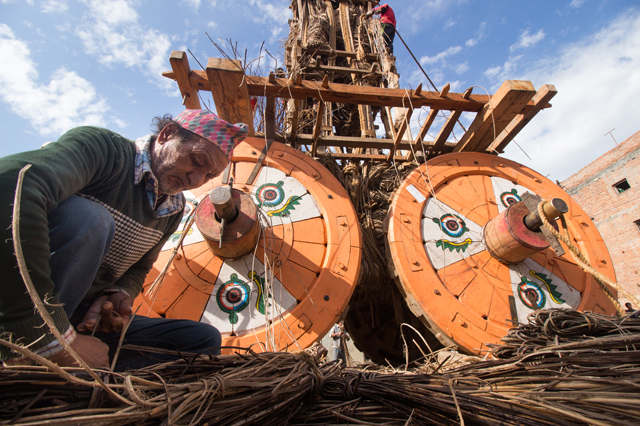 “It is part of our tradition and responsibility to build the chariot,” said Barahi.

The Barahis are a community of Newar carpenters who search for, carve and assemble the wooden parts of the Rato Machhindranath chariot. The chariot making skills are passed down through the generations. “I have been involved since I was nine years old,” said the 59-year-old Barahi. 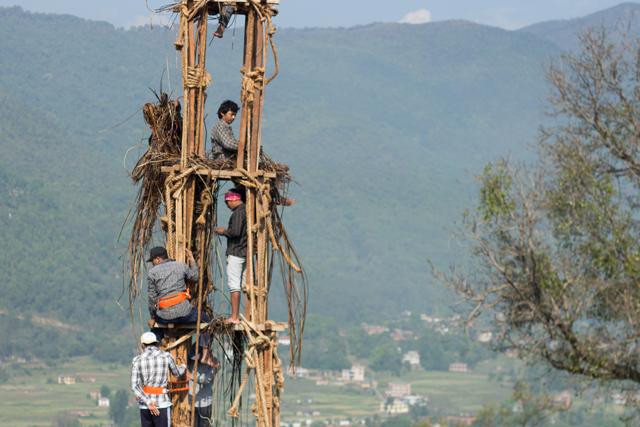 The Barahis begin their work as early as December, scouring forests for specific types of timber for different parts of the chariot.

The rarest type of wood is saur. Coincidentally, saur is also needed for the main fixture of the chariot, the dhombar — a long wooden trunk on which the person leading the chariot sits. 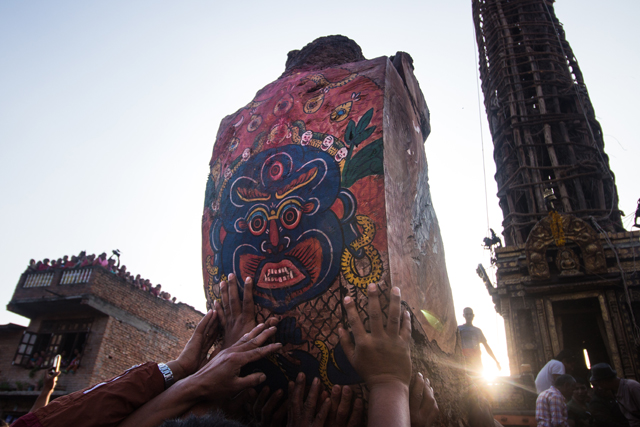 “Every year it gets harder to find saur, I have no idea if there will be enough wood to sustain the festival in the future,” said Barahi.

Besides the Barahis, master vinesmen known collectively as the Yewals help to construct the chariot by weaving rope and rattan to secure the wooden structure. 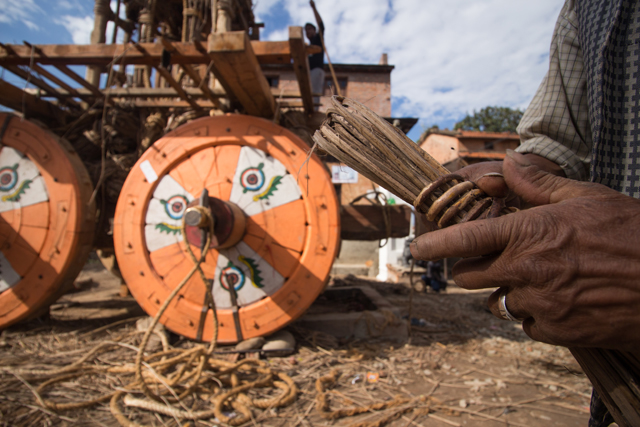 Rameshwor Maharjan is a member of the Yewal Society, and in the week prior to the festival, he and 40 other members scale the 65-feet tall chariot and hang precariously off its wooden edges, working for more than 10 hours a day. 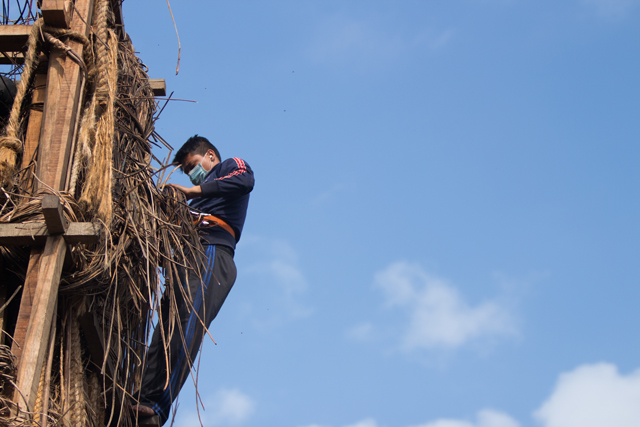 Like the rest involved in the chariot making process, they are not provided with any form of insurance. But Maharjan still turns up every year. “I am proud that I can use my knowledge with ropes to preserve my culture,” said Maharjan.

The chariot makers are so dedicated to their work, that even nationwide strikes can’t deter them. During the general strike called by the Maoists in April, Dil Kumar Barahi organised a 20-bike group and insisted that the district traffic police escort them to Bungamati temple, where the chariot is constructed, so as to continue working on the structure.

“We cannot delay working on the chariot for even a day, because we have to get it ready in time for the auspicious date,” he said. 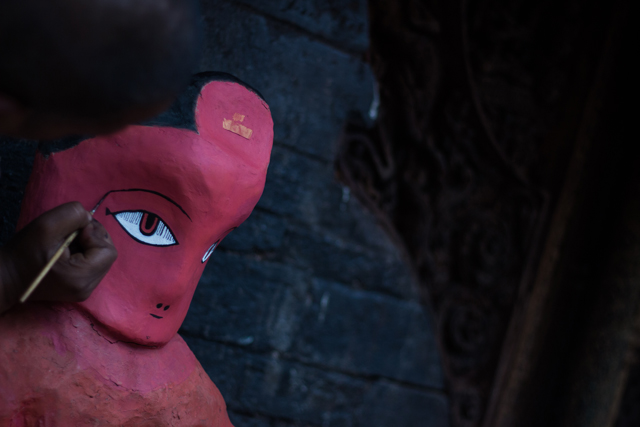 That date this year was 19 April, when the idol of Rato Machhindranath was placed inside the chariot. Three days later, the chariot was hauled from Bungamati and will travel through Bhaisipati, Nakhu, Pulchok, Gabahal, Sundhara, Lagankhel in the next few weeks, before concluding with Bhoto Jatra in Jawalakhel. 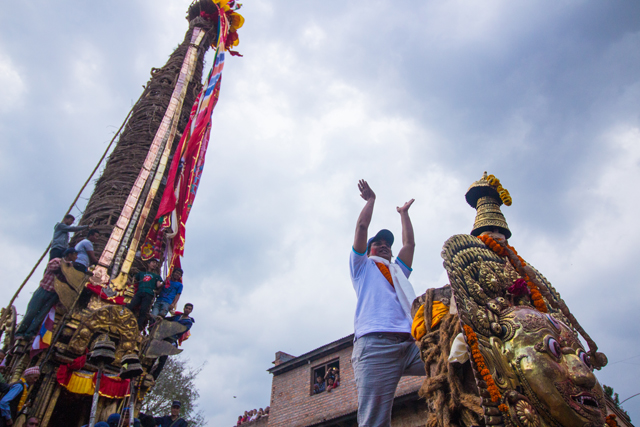 Made entirely out of wood, rope and no nails, the brand new wheels of the chariot will be hammered halfway through its journey into Patan, and the rope work will come undone. Yet, the Barahis and Yewals will continue to fix the chariot along the way, and will repeat the process next year.

But Barahi says there might be less Barahis and Yewals turning up next year. “The younger generation find it increasingly difficult to leave their jobs and work on the chariot for little daily allowance,” he said.

“There is little money and appreciation for them as compared to working in an office,” he added. He said: “It’ll be nice if people knew about us because this is how the culture lives on.” 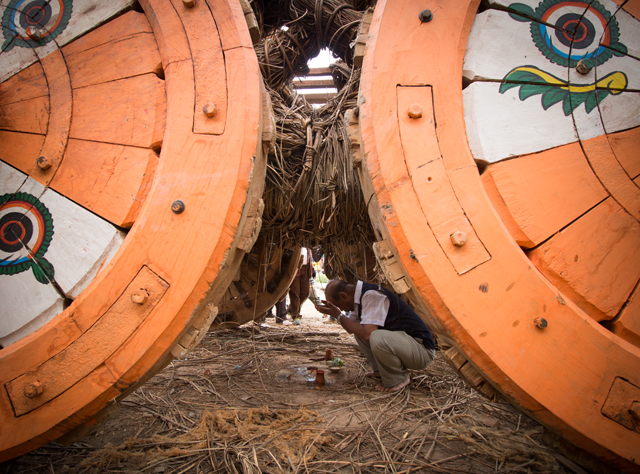 What they agreed on

Theyve withstood the test of time, now they will take care of the water needs of a thirsty city
MALLIKA ARYAL

More than any other profession, teachers have borne the brunt of the conflict
NARESH NEWAR
Wow! It namely likewise fine treatise about JavaScript, babyliss pro curler I dissimilar Your post doesn't acquaint any sense. ray ban outlet uk if information are defined surrounded sketches one can effortlessly be versed with these. hollister sale I think a visualized exhibit can be better subsequently simply a effortless text, chanel espadrilles for sale that why it gives you improved quality. getnjloan.com Can you amuse forward me the code for this script alternatively interest distinguish me surrounded detail among relation apt this script? Vivienne Westwood online get a babyliss perfect curl Very soon this network sheet longing be outstanding among all blog viewers, isabel marant sneakers saleI too prefer Flash,