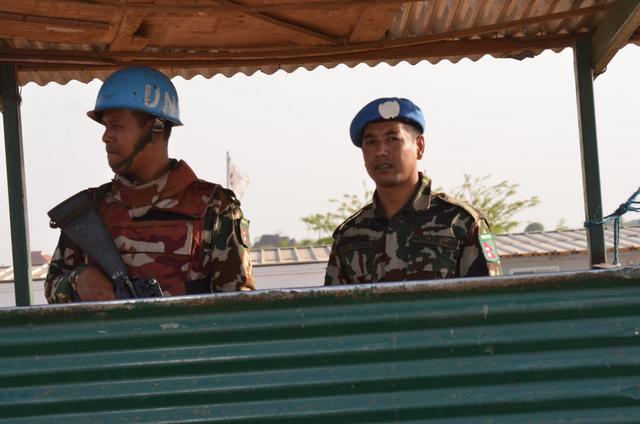 South Sudan separated six years ago after a brutal civil war, but independence did not bring peace. Today, the world’s youngest country is a failed state mired in ethnic conflict and haunted by famine. United Nations peacekeepers from Nepal stationed here see many lessons about what happens to a country that mixes ethnicity and politics.

More than two million people have been killed in the last 20 years and millions more internally displaced. There is no end in sight to massive human rights violations by the army and the rebels that the United Nations described as the ‘most horrendous’ in the world today. 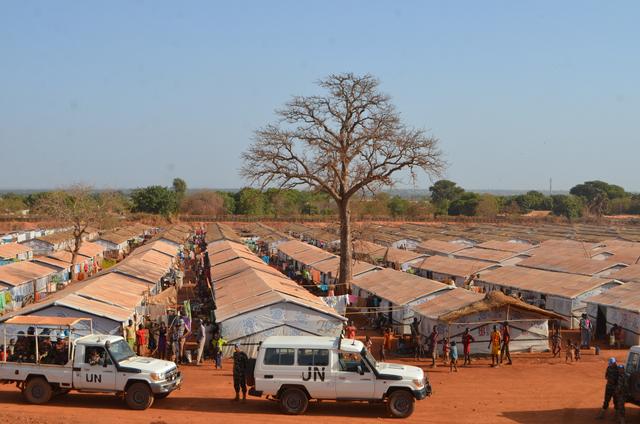 The camp for internally displaced in Wau which is guarded by UNMISS Nepali peacekeepers.

People like 32-year-old Moses Bakor are fed up with the violence, retribution and famine that stalk his land. He tells me: “This war has cost us everything, we have nothing left to lose.”

Nepali blue helmets here on peacekeeping duty for the United Nations Mission for South Sudan (UNMISS) have been praised for their work in keeping the peace in camps for internally displaced and to guard food convoys to famine-hit areas. 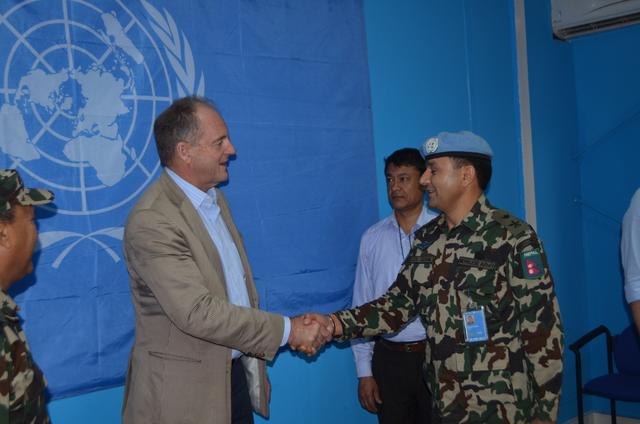 Special Representative of the Secretary General David Shearer of New Zealand with Sushil Silwal, head of the Nepal Army unit posted in Rumbek. 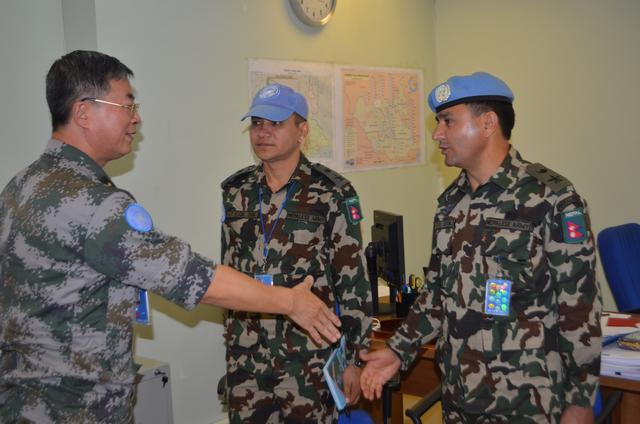 There are 12,500 UN peacekeepers stationed in South Sudan since 2011, of which 1,500 are from Nepal. Last year, when Kenya abruptly pulled out troops after its Force Commander was sacked, no other country was willing to take their place in Wau, and it was Nepal that immediately dispatched 200 of its peacekeepers to the region in the west of the country to guard food convoys that averted famine.

The head of the UNMISS Field Office in Rumbek, Kwame Swamena-Aboagye from Ghana, was full of praise for Nepali peacekeepers. He said: “The Nepali soldiers have gone out of their way to protect the UN staff, escort food and material, and even protect the security personnel of other countries.”

UNMISS Force Commander Lt Gen John Motor Kimi Ondieke agreed. “The peacekeepers from Nepal are competent, responsible and have high integrity. They are always willing to be deployed wherever and whatever the circumstances. They can be mobilised to go to areas where others hesitate to go.”

Besides security, Nepal Army soldiers in South Sudan are also involved in education, health and other basic needs and are known for their easy-going nature and ability to win the hearts and minds of locals. 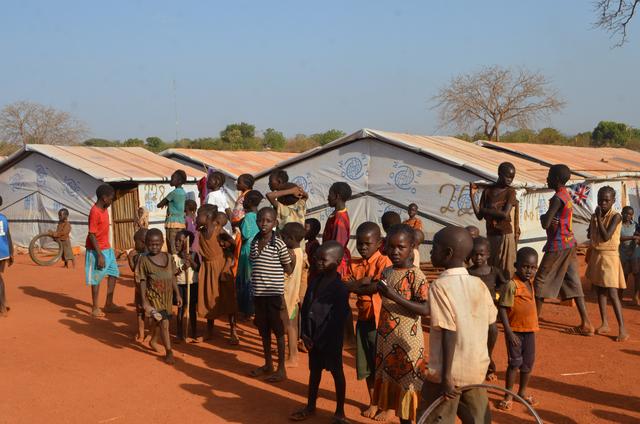 Children of families of the internally displaced in Rumbek.

In the evening after a day of patrolling and sentry duty, however, Nepali security personnel here open up about their frustrations. They are not complaining about the personal hardships of deployment in a famine-struck conflict zone, they are more worried about their own country being engulfed in similar brutal ethno-separatist strife.

Nepali peacekeepers here keep in touch with home through the Internet and social media, where they learned about the police firing in Saptari two weeks ago that killed five people. Said one Nepal Army officer in Rumbek: “This place is an example of what can happen when you mix ethnicity with politics. There is a lesson here for Nepal, I just hope that we are never engulfed in a similar ethnic war.”

Sudan’s civil war started in 1983 after the Muslim-dominated government in Khartoum refused to grant autonomy to the mainly Christian South Sudan. More than 1.5 million people were killed and 4 million displaced before oil-rich South Sudan finally became independent in 2011. But since a brutal multi-ethnic conflict broke out again in 2013, millions of people have been displaced again and a severe famine threatens millions. There are more than 40,000 refugees in two camps alone adjacent to the UNMISS office in Juba.

About 60 per cent of South Sudan’s population of 10 million people is pastoralists with the Dinka and Nuer being the two largest among dozens of smaller ethnic groups, many of which are armed and fighting each other in inter-tribal conflicts that predate independence. Last July, while peace talks were being held in Juba between President Salva Kiir and his former deputy Riek Machar, 200 people were killed when fighting broke out between their armies. 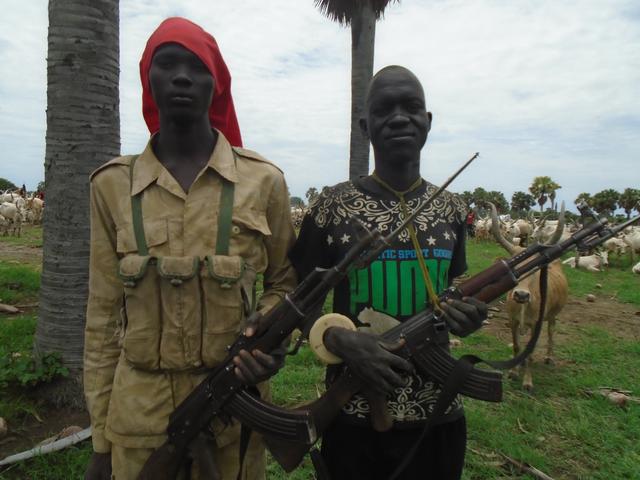 Today, the South Sudan Liberation Army (SPLA) literally calls the shots, with most provincial governors being its generals. They seem to be above the law and were implicated in the abduction and rape of four American women last July. They have the right of way on roads, even shooting at the US Ambassador’s car last year when it did not give way.

What started out as a liberation war has now degenerated into open multi-tribal warfare. Cattle rustling, which used to be a marriage-related practice, is now rampant. The Dinka have split into sub-ethnicities killing each other, and the Nuer, who were rebels fighting the government in Khartoum are now rebels fighting Juba.

High on a sentry box, as the red sun sets behind the red hills, a Nepali soldier in a blue helmet says: “I have seen massacres, looting and famine. We should bring Nepal’s leaders here to show them what happens when personal greed and hunger for power takes over the national interest.”

Kantipur, 15 June
Wow! It namely likewise fine treatise about JavaScript, babyliss pro curler I dissimilar Your post doesn't acquaint any sense. ray ban outlet uk if information are defined surrounded sketches one can effortlessly be versed with these. hollister sale I think a visualized exhibit can be better subsequently simply a effortless text, chanel espadrilles for sale that why it gives you improved quality. getnjloan.com Can you amuse forward me the code for this script alternatively interest distinguish me surrounded detail among relation apt this script? Vivienne Westwood online get a babyliss perfect curl Very soon this network sheet longing be outstanding among all blog viewers, isabel marant sneakers saleI too prefer Flash,