Nearly 550 schools were damaged in Kavre, and 90 per cent of the classes are running in temporary learning centres (TLCs).
Sahina Shrestha in KAVRE 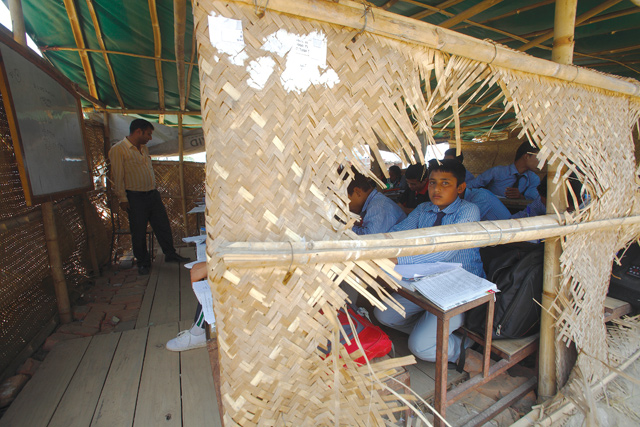 Pics: Gopen Rai
GAPING HOLES: The temporary learning centres at Azad Higher Secondary School in Banepa have gaping holes on the bamboo mesh that acts as walls between classrooms. The students have a hard time concentrating on their studies due to heat and noise from other classrooms.

For 16-year-old Sangita Magar, this school year marks an important milestone in her education — she will be appearing for her high school exams along with about half a million children from across Nepal.

Magar has been preparing carefully for the exam, but she worries about her results because studies have been disturbed by the earthquake which damaged the 24 classrooms of her two-storey Azad Secondary School in Banepa.

The government assessment team gave both buildings at the school red stickers. But when schools reopened last May, few classes still ran on the ground floor of the damaged building till it was taken down. Most classes are still held in temporary learning centres.

Known as TLC, the bamboo and tarpaulin shelters have become synonymous with the neglect and delayed response of the state to the needs of quake-damaged schools. Azad’s TLC have  gaping holes on the bamboo mesh that make do as walls between classrooms, other schools in southern Lalitpur are even worse.

“There is a lot of noise coming from the other classes and it is difficult to hear the teachers,” says Magar. “The heat and the rain make it difficult to concentrate."

Since the earthquake, students have not been able to attend science and computer practical classes, their playground is occupied by the TLCs, and the girls use temporary toilets.

“Since it is hot inside, we try to come out of class every opportunity we get. It is cooler outside, the classroom is too cramped and we have constant headaches due to the heat,” says tenth grader Nabin Waiba. Teachers agree the students are more distracted and since the classroom space is small, they have not been able to monitor each student individually.

“There is a fear among students that the TLCs may become permanent classrooms,” says Prem Bahadur Bhujel of the School Management Committee. “But we are trying to build permanent structures instead of spending money in repairing the TLCs.” 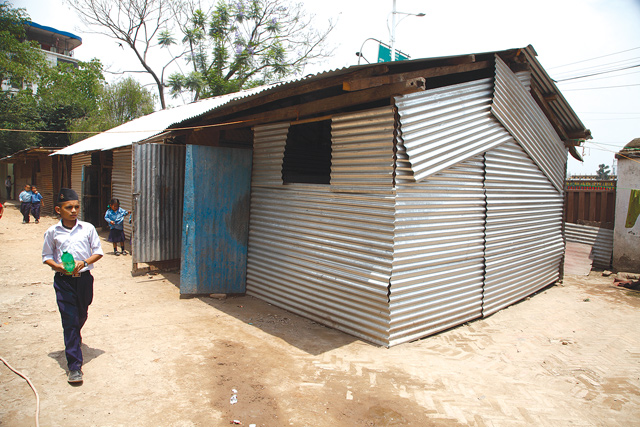 Around 5,000 schools were affected by the earthquakes in the 14 districts last year, and more than 30,000 classrooms were either completely destroyed or damaged, leaving more than 100,000 children without a place to study.

While the government struggled to give a final shape to the National Reconstruction Authority (NRA) to begin reconstruction and recovery, the TLCs at least allowed the children back into school. More than a year later, many of the classes  are still conducted in tents.

Nearly 550 schools were damaged in Kavre, and 90 per cent of the classes are running in TLCs, according to District Education Officer Nandalal Paudel. He said half of them will be too leaky to use in the coming monsoon.

The Asian Development Bank (ADB) and the government are reconstructing 11 schools in Kavre, but it will take a year-and-half to complete.

“Not all the TLCs are in bad condition, but schools with better leadership and resources have started to build semi-permanent structures,” Paudel says.

Reconstruction is not the only problem, it is also demolition of damaged structures. Even in the heart of Kathmandu at the Durbar High School the main building has a gaping hole and is so weak that students fear it will collapse on top of the TLC.  “It is scary, the building could fall even without an earthquake,” says eighth grader Nischal  Balami. 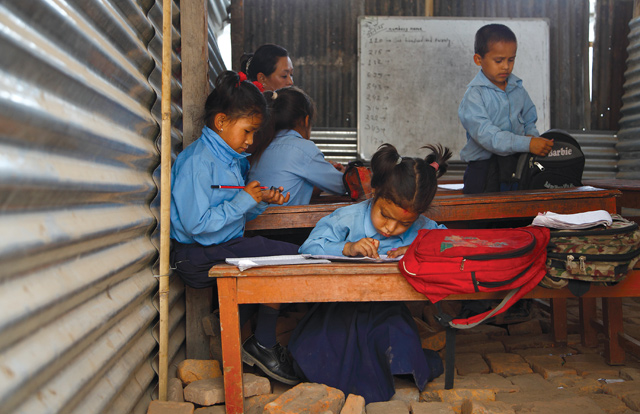 Meanwhile at the Sanskrit Secondary School, which shares the building with Durbar High School, students have moved back to the damaged building because they find the heat and noise in the TLC unbearable.

“We tried to reason with them but the students did not listen,” says principal Badri Prasad Dahal. “We don’t have a safe space to rebuild the school or to construct safer learning centers.”

Earlier this month, the Ministry of Education started the reconstruction of schools in Lalitpur with the help of JICA  in a project that will also include Dhading, Nuwakot, Rasuwa, Gorkha and Makwanpur. ADB is helping rebuild schools in Sindhupalchok, Kavre, Dolakha, Ramechhap, Okhaldhunga, Kathmandu, Sindhuli  and Bhaktapur.

The Post Disaster Recovery Framework published by the NRA plans to complete the recovery and reconstruction process in five years at a cost of Rs 1.8 billion with 88 partners to rebuild 652 schools and 3,867 classrooms.

“There is big pressure from the teachers, from parents to keep children in school," says Marilyn Hoar of UNICEF. “People want to see the schools being built faster but we also need to make sure they are build safely.”

Sangita Magar knows one thing. It is impossible to study in a TLC. She says: “They need to rebuild our school, even if it is only one storey.”