It's all about IT

Nepali software companies write algorithms for self-driving cars and analysed data for French President Macron’s elections campaign, but they could do much more
Sahina Shrestha 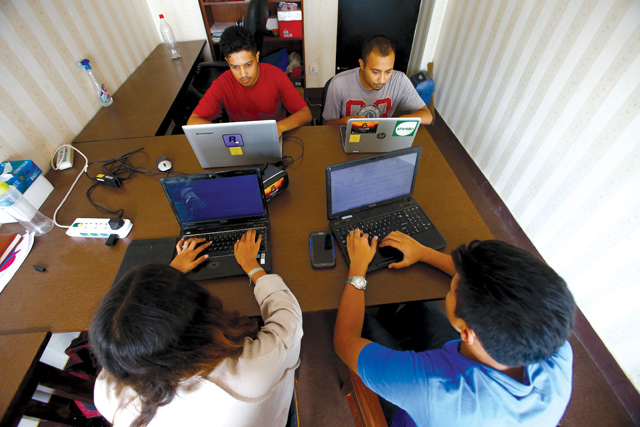 Pics: Gopen Rai
TECH OFF: The Semantic Creations team (left), which came up with NepalVR, the first virtual reality application focused on tourism, at their office in Pulchok.

Even as an information technology student, Pawan Kandel, 23, is already earning up to Rs15,000 a month developing android applications and websites for clients in Nepal and abroad.

This is not just useful pocket money, but also helps him build practical skills. There are hundreds of bright Nepali students like Kandel who have found jobs in the software industry.

“Right now for a person with good technical skills there are a lot of opportunities in the IT sector in Nepal,” says Kandel. “But it is not easy, and there is room for improvement.” IT and IT-enabled services are transforming the way Nepalis work, creating job opportunities and making the labour market more inclusive, innovative and global. But insiders say there is a shortage of good managers, and the lack of a forward-looking government strategy is hampering growth as well as innovation.

In the 1980s, American couple Diana and Bill Miller established DSI International in Kathmandu to build software, train engineers and cater to clients, mostly in the US, heralding the arrival of the IT industry in Nepal. By the time DSI closed shop in the mid-’90s, homegrown companies like Professional Computer System and Yomari were in place. The 2000s saw an influx of medical transcription work and call centres, and more players soon joined the game.

Since then, homegrown and foreign companies have multiplied to meet the software and design needs of customers at home and abroad. They work in data processing, call-centre operations, medical prescription transcribing, map digitisation, mobile and web app development, website development and animation, among others.

“There are great things happening in the IT scene in the country right now but we still have a long way to go if we are to move from a labour economy to a knowledge economy,” says Lava Kafle, a software engineer with over 15 years’ experience.

There has been a slew of tech start-ups and homegrown apps, but only a few have made a mark within Nepal. “Currently, Nepal is a trend follower in the global IT market and real innovation is still missing here,” says Bobby Basnet, co-founder of Semantic Creations, who came out with a tourism-related virtual reality (VR) app, NepalVR, last year. “We still have not been able to test out new tech and applications and most of the ideas we pick up tend to be saturated in the international market.”

It is still difficult for tech entrepreneurs to secure funding, and long-term financial security remains a concern. Many start-ups are still running on personal funds. “It takes a good four or five years for an IT company to establish itself. The government should consider giving tax holidays for start-ups and establishing specialised economic zones for the industry,” says Kafle.

Workshops and mentorship programs to develop the skills of students and fresh graduates are still difficult to come by, and investment in research and development lags. “AI and machine learning are hot words in the IT world right now, but it is difficult to get research funds and there is a lack of research-minded people,” says software engineer Nikhil Shakya.

Industry insiders say government incentives and policies are needed. “Policies are weak and in the absence of a proper regulatory body, the entire industry still remains fragmented,” says Hempal Shrestha of the Federation of Computer Associations of Nepal and co-founder and director of the Nepal Entrepreneurs’ Hub (NEHUB).

Insiders say another factor hindering innovation is the absence of domestic demand. “Banking could offer opportunities to the domestic IT market, but not many are using domestic software, opting instead for expensive foreign software,” says Shrestha.

Outsourcing is turning out to be one of Nepal’s fastest-growing exports. Although still behind India and the Philippines, the country’s inexpensive English-speaking workforce is drawing investors. Many Nepali companies and foreign subsidiaries provide services to overseas clients in website and app development, big data management, designing and augmented and virtual reality.

“Nepalis are good at crunching numbers, and work hard at a relatively inexpensive cost compared to other outsourcing destinations. We adapt quickly to newer technologies and our proficiency in English aids in communication and that is what makes Nepal attractive,” says Hempal Shrestha. Besides, working with foreign clients provides Nepali engineers with exposure and skills.

Insiders say the industry is surviving on outsourcing: “We are too focused on outsourcing at the moment," says Kafle. "For real development of the field we need to come up with real innovations.”

A factory in the clouds 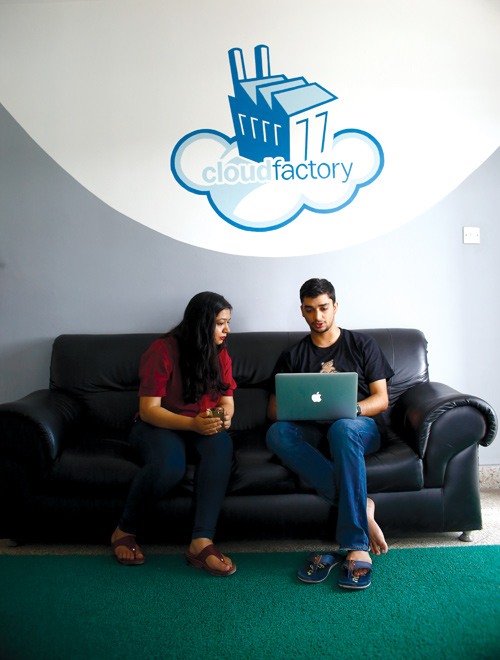 In 2008, Canadian technologist Mark Sears and his wife came to Nepal for a two-week vacation. They met talented people who had basic software skills but lacked work opportunities. Sears stayed on, training youngsters in high-demand skills like Ruby on Rails (a programming language) and matching international technology needs with Nepal’s capable workforce.

One project led to another and CloudFactory was born. Its vision: to help change the lives of millions of people by linking them to work. The idea was that if an individual has a computer, an internet connection and basic skills, then CloudFactory could connect them to the kind of work that was previously limited to people with programming degrees. Today, CloudFactory employs 2,044 people, 1,280 in Nepal.

The company uses a cloud-based platform to distribute simple tasks from tech companies globally to ‘cloud workers’ in Nepal and Kenya. The tasks can include inputting data, transcribing receipts and annotating images for companies developing artificial intelligence (AI) algorithms for self-driving cars. Recently, CloudFactory worked with a company in France that applied data to help French President Macron win the recent election. 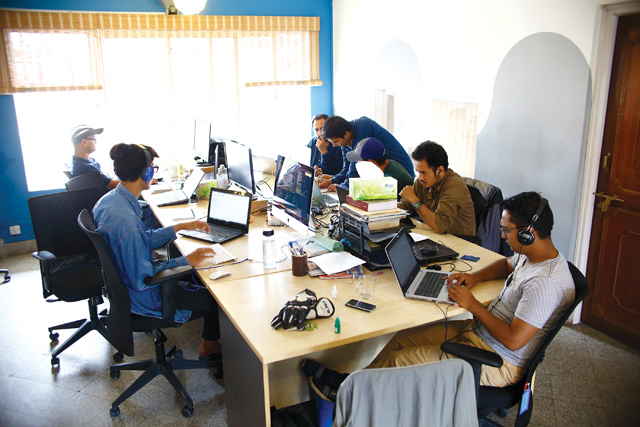 Engineers at the CloudFactory office in Bhaisepati. CloudFactory is one of the leading IT companies, employing over 1,000 people.

“What we are doing is not just providing data services for our clients but people who care,” says John Snowden, general manager of CloudFactory in Nepal. “We are doing meaningful work using brilliant technology to get there, and that results in people who care,” he adds.

What sets CloudFactory apart from its competitors is exactly that: it provides clients a relationship with workers for whom the work is meaningful and who care about doing a good job. Those working here get an opportunity to grow and make a difference.

Monica Ghimire, 25, joined CloudFactory as a part-time worker. Fast forward five years and she is now a project lead in the company. “The working culture and environment here is great. There is something new to learn every day and new ideas are welcomed. There is constant interaction and mentorship,” she says.

Maoist leader Hisila Yami in Kantipur, 23 February
Wow! It namely likewise fine treatise about JavaScript, babyliss pro curler I dissimilar Your post doesn't acquaint any sense. ray ban outlet uk if information are defined surrounded sketches one can effortlessly be versed with these. hollister sale I think a visualized exhibit can be better subsequently simply a effortless text, chanel espadrilles for sale that why it gives you improved quality. getnjloan.com Can you amuse forward me the code for this script alternatively interest distinguish me surrounded detail among relation apt this script? Vivienne Westwood online get a babyliss perfect curl Very soon this network sheet longing be outstanding among all blog viewers, isabel marant sneakers saleI too prefer Flash,