The earthquake destroyed the historic trading town of Dolakha, rebuilding it would revive its historical importance
Sahina Shrestha in DOLAKHA 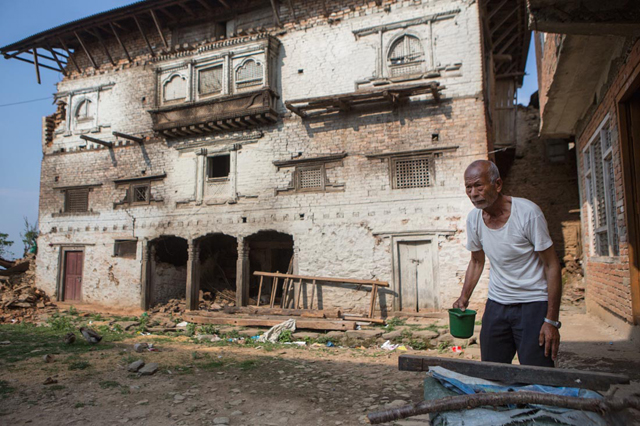 At 97, Dabal Bahadur Shrestha has fond memories of his scenic hometown of Dolakha Bazar. These days the recollections are especially poignant because he has seen that the earthquakes of 2015 destroyed the historic town.

Now living in Kathmandu, Shrestha recalls how townsmen all knew and greeted each other, rejoiced during festivals, worked hard in the terrace fields and feasted on buffalo meat that cost next to nothing. Shrestha’s ancestral home was near the town’s famous Bhimsen Temple, which was one of the few structures that survived 2015. 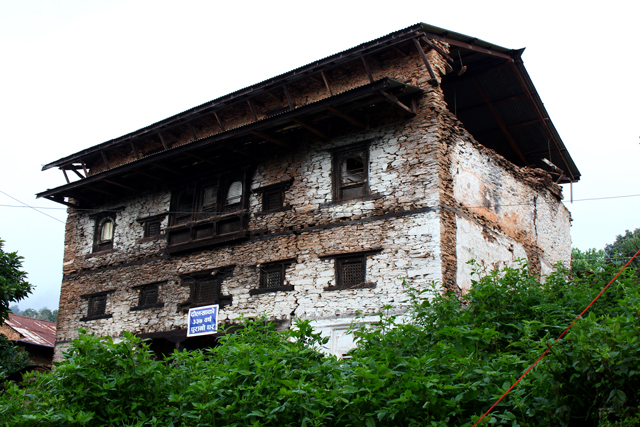 Pic: Sahina Shrestha
The 335-year-old house in Dolakha Bazaar after the earthquake.

The Newar inhabitants migrated to Dolakha from Kathmandu in pre-Malla times, hired by the nobility there as artisans and to work in the famous mint that supplied coins to Tibet. Both the ancient mint and Shrestha’s 335-year-old three-storey ancestral home with intricately carved lattice windows were damaged. 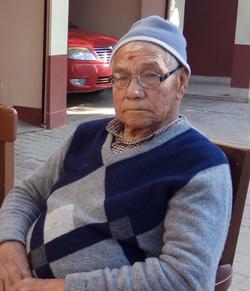 “The house was built by my female ancestor after her husband passed away,” says Dabal Bahadur in Dolakhae Newari (see box). The foundations were strong enough to withstand multiple earthquakes including the Big One in 1934. Over the years, except for the tin sheets that replaced the original thatch roof the house has remained as it was. Like the old house locally called puranchhen, much of the historic town including its numerous temples and chaityas and historic buildings are in ruins.

Nearby, the old mint is also partially collapsed (pic, above). Weakened by the 25 April 2015 earthquake, the structure collapsed in the 12 May aftershock which had its epicenter only 8km away from Dolakha. Dhan Bahadur Shrestha, 85, is a descendant of the people who made the famous silver coins used in Tibet.

“My family made those leather coins before they were replaced by copper and silver,” Shrestha says, “none of the leather coins remain, but we had the house. Now even that is gone.” 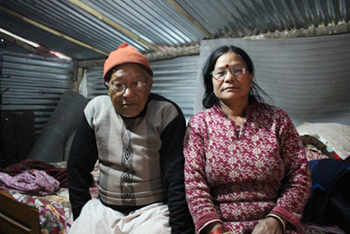 Dhan Bahadur Shrestha has been living in a temporary shelter with his wife after the earthquake damaged the old mint house.

A year and a half since the earthquake, some of the residential buildings in Dolakha are being reconstructed, but there is a danger that the original look of the old town will change with the use of concrete. Rebuilding Dabal Bahadur and Dhan Bahadur’s homes will require the expertise of conservation architects.

“It is not just about rebuilding the private and public houses,” explains Surya Bhakta Sangachhe of the National Society for Earthquake Technology (NSET), “it is about reconstructing heritage sites and festival routes, reviving the economy and the cultural heritage and developing skills and social infrastructure.”

NSET is working with the community and the Municipality to plan the reconstruction of Dolakha’s core areas. “The task here is to regenerate and redevelop a town that has seen a major decline in recent years,” adds Sangachhe, “and it is the locals that need to take the lead.”

Dolakha’s history goes back before the 16th century when it flourished as a kingdom on the ancient trade route between India and Tibet along the Tama Kosi Valley. Newar traders from Kathmandu Valley settled here, bringing with them the vibrant culture and festivities, adapting it to suit their new habitat. Dolakha even has its own version of the Kumari.

There was already outmigration, but with the earthquakes 70 per cent of Dolakha’s original inhabitants have moved out. The town wears a deserted look and locals admit that keeping the history and traditions alive is an uphill task.

“The town used to be vibrant and people from as far away as Patan came to see our Machindranath Jatra. But the festivals are not the same anymore, and now even the house of the gods are gone,” says Shyam Krishna Shrestha, 76, leaning on the building in Pingal that houses the chariot. 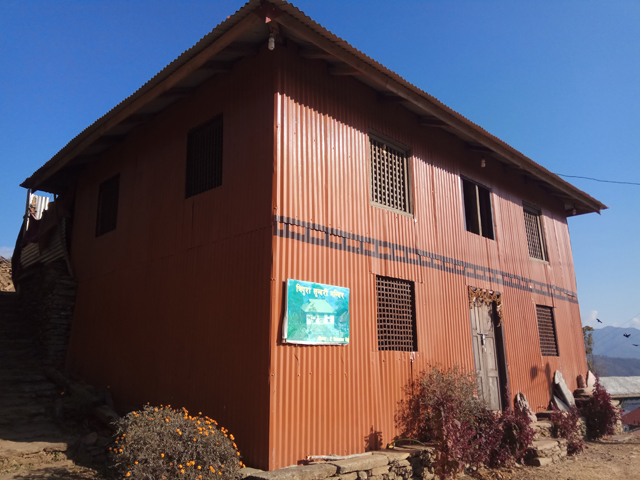 The Tripura Sundari temple was brought down by the 2015 earthquake, the locals built a temporary structure out of tin sheets and wood to resemble the temple.

“There was a house here, and the idol of Harisiddhi was on the first floor,” recalls Som Prasad Shrestha. “After the property was nationalised, the house came down and the municipality built a smaller structure but even that was damaged by the earthquake.” Because the building is gone, so have the dance festivals performed in the dabali in front of the Harisiddhi Temple. Som Prasad says: “There is no one to carry on the traditions.” 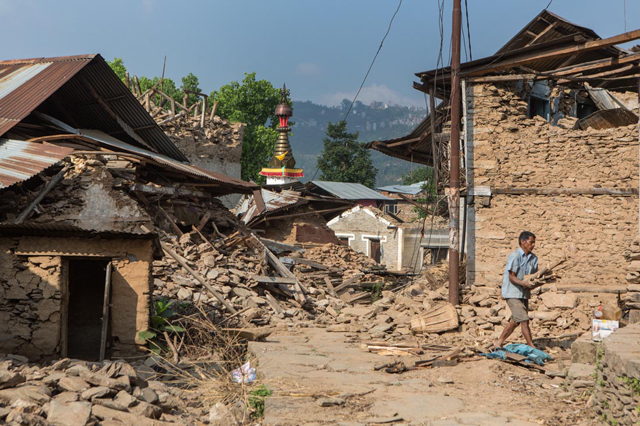 The old Kumari Chhen, from where the Bhairav Kumari jatra begins, lies dilapidated. Every year, Renuka Shrestha, 65, donates money to the trust to celebrate the Kumari jatra. “But finding people willing to participate in the festivals is becoming more difficult,” she says, “I am not sure how much longer the festivals can go on.”

On the last day of Khadga Jatra, men from the Thami community used to suck the blood of buffalos during ritual sacrifices, but that no longer happens. The three toles of the town each had their lakhey dance during the Hiley Jatra but not all three are performed each year anymore.

Bhagwan Das Shrestha has watched the festivals vanish one by one. He says: “Most people don’t live here anymore, so the guthis don’t have anyone to perform the festivals. We need to figure out how we can move ahead without looking back. We need to revive our cultural heritage by rebuilding a stronger community.” 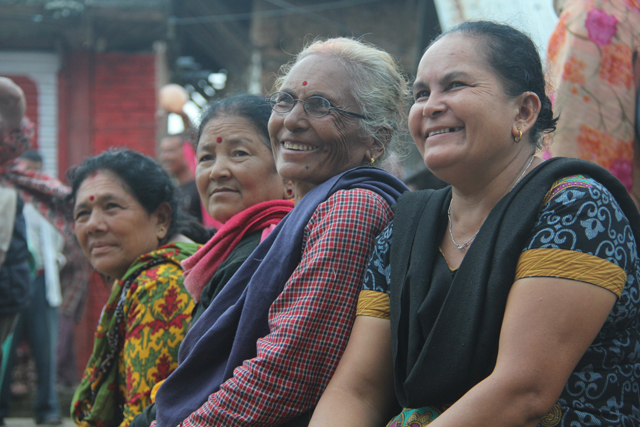 There is an apocryphal tale of how the Newari dialect spoken in Dolakha came into being. When the five Pandavas were passing through the jungle during their exile, they developed a secret language so as not to be identified, and that is what the Newars of Dolakha speak today.

To anyone familiar with the Newari spoken in Kathmandu Valley, hearing it spoken in Dolakha is starkly different. There are even those who claim that the Newari language originated in Dolakha and came to Kathmandu, and not the other way around. This is a claim linguist Kashi Nath Tamot refutes.

He says: “The Newari language did not originate from Dolakha, but the Newari spoken in Dolakha is indeed how it was spoken in Kathmandu 500 years ago. The language evolved in Kathmandu, but because Dolakha is so isolated it remained intact there.”

In Dolakhae Newari a cat is called bhati, in the Valley it is called bhau. It is from bhati that the word for cat eventually became bhau. Scholars also say that the Newari spoken in Dolakha is strongly influenced by the indigenous Thami and Tamang languages.

Nepal in the anthropocene, Kunda Dixit

Far from home, Nepalis in Japan cling to their roots
CK LAL

Madhesi dalits are on no ones agenda
DAMBAR K. SHRESTHA in HARIPUR, SAPTARI

Constitutional ability
YASH GHAI and JILL COTTERELL
Wow! It namely likewise fine treatise about JavaScript, babyliss pro curler I dissimilar Your post doesn't acquaint any sense. ray ban outlet uk if information are defined surrounded sketches one can effortlessly be versed with these. hollister sale I think a visualized exhibit can be better subsequently simply a effortless text, chanel espadrilles for sale that why it gives you improved quality. getnjloan.com Can you amuse forward me the code for this script alternatively interest distinguish me surrounded detail among relation apt this script? Vivienne Westwood online get a babyliss perfect curl Very soon this network sheet longing be outstanding among all blog viewers, isabel marant sneakers saleI too prefer Flash,