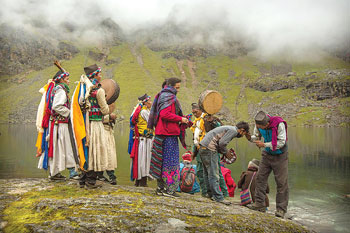 On 9 August, 2014, the eve of Janai Purnima, Gosainkunda Lake (4300m) will be the venue for the climactic enactment of the greatest Vedic story. In their quest for amrit (the elixir for spiritual immortality), the titans and the gods collaborated in churning the ocean. Mount Mandara was selected as the churning stick, the king of serpents Vasuki would be the churning rope, and Vishnu himself in the form of a tortoise dove into the ocean to support the base of the mountain with his back. Vasuki wrapped around the mountain, the titans laid hold of one end of the rope and the gods the other. They churned for a thousand years.

Unfortunately from the murky depths of the ocean, the first thing to rise was Kalakut, a deadly poison.  The operation could not proceed until someone drank this concoction. Lord Shiva, who was in the neighbourhood, shook himself from his deep meditation, surveyed the scene, and swallowed the poison in one gulp. His throat promptly turned blue (Nilakhanta, aka Blue Throat, is another name for Shiva). He needed to cool off the immense heat generated by Kalakut; so he dove into Gosainkunda Lake.

In the memory of this selfless act by Lord Shiva, pilgrims annually take a holy dip in the lake and wash away their sins. But just as in the case of the great Shiva, this pilgrimage is not risk free.

Many pilgrims to Gosainkunda suffer from acute mountain sickness (AMS) due to very rapid ascents to 4300m. Many pilgrims despite strong advice, make the trip in two days instead of the recommended four or five days.

In light of this,The Mountain Medicine Society of Nepal (MMSN) and the Himalayan Rescue Association (HRA) carried out a double blind, randomised controlled trial to see if the most commonly used drug for the prevention of AMS, Diamox, would be helpful in these rapid ascends. Although there are proper studies of high dose Diamox (750 mg) which show the effectiveness of this drug in preventing AMS, there are no studies of low dose Diamox (125 mg, two times a day) in rapid ascents.

Imagine the dismay when the study revealed results which were very confusing and almost uninterpretable. What went wrong? Apparently, pilgrims were not following simple directions regarding the study, and some were even exchanging study pills with their fellow pilgrims. Clearly the researchers had not spent enough time counselling the pilgrims about the importance of following directions in a medical study.

This sort of problem is rarely encountered when studying western trekkers in randomised controlled trials in the Himalaya. Hence the finding of the Gosainkunda Diamox trial became more of a study in cultural mores than an actual scientific trial as MMSN and HRA had planned.

Starting from Dunche in Rasuwa district to Gosainkunda Lake, it is best to take four to five nights to reach the lake to properly acclimatise. Listen to your body and do not push ahead disregarding symptoms of AMS, which are chiefly headache and nausea. Volunteers with accurate knowledge of altitude sickness from the HRA and MMSN will also be at hand during Janai Purnima to help.

Taking Diamox, if you don’t have a sulpha allergy, will help prevent and treat AMS. Drinking two litres of clean water (boiled or treated with chlorine/iodine tablets) per day will help avoid dehydration. Proper rain gear and carrying table salt to deal with leech bites will also come in handy.

The lake area is completely packed during Janai Purnima so being psychologically prepared for some of the problems will help. But pilgrims find the experience rewarding despite all the hardship.

Whether to absolve Dipendra or to indict him posthumously, it was important that everyone (conspiratorialist, rationalist, or royalist) who cared for the country demand that parliament hold hearings on the royal massacre.
KANAK DIXIT

A pyramid scheme promising participants ?24,000 each is sweeping Britain

For the first time since Prithvi Naryan Shah unified the country, Nepals "footprint" spans half of Asia.
BINOD BHATTARAI

Posturing has gone into high gear as the government and Maoists sit at the table.
Wow! It namely likewise fine treatise about JavaScript, babyliss pro curler I dissimilar Your post doesn't acquaint any sense. ray ban outlet uk if information are defined surrounded sketches one can effortlessly be versed with these. hollister sale I think a visualized exhibit can be better subsequently simply a effortless text, chanel espadrilles for sale that why it gives you improved quality. getnjloan.com Can you amuse forward me the code for this script alternatively interest distinguish me surrounded detail among relation apt this script? Vivienne Westwood online get a babyliss perfect curl Very soon this network sheet longing be outstanding among all blog viewers, isabel marant sneakers saleI too prefer Flash,