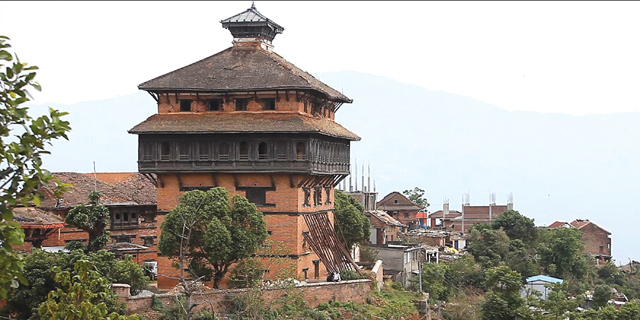 Pics: Bikram Rai
COLLATERAL DAMAGE: The seven-storey Nuwakot darbar is propped up by metal rods. Without proper care, UNESCO warns that the palace will not survive another monsoon.

On 25 April 2015, Govinda Baniya, office staff at the Department of Archaeology (DoA), had just taken a break from his museum duties when the earthquake struck. As the temples and monuments in Nuwakot Darbar Square swayed and palls of dust covered the area, around 30 people visiting the palace-turned-museum ran for cover.

Sitting sublimely over the Trisuli River, the Nuwakot Darbar was probably the best preserved and impressive palace complex outside the Kathmandu Valley. Built by Prithvi Narayan Shah as his forces attacked Kathmandu in the late 18th century, it was nine storeys high before the 1934 earthquake reduced it to seven.

The 2015 quake damaged the south and west sides of the palace. Pillars developed cracks and the roof came unhinged. Aftershocks and the subsequent monsoons caused further damage. “The only reason the building is still standing is because it has a strong foundation and was periodically maintained before the earthquake,” says Baniya.

Before King Prithvi Narayan unified Nepal, Nuwakot served as a colony of Kantipur (Kathmandu), and was regarded as the main western gate to the Valley. It was the central trade point between Tibet and Nepal, and the three Malla kingdoms of the Valley had constructed palaces to house their representatives.

It’s believed that King Prithvi narayan brought in artisans from the Valley to build the Darbar, and influences of Kathmandu can be clearly seen in the intricate wooden carvings as well as in local place names, like Indra Chok. Talk to any local here and you will be proudly guided through the historic importance of the place, but frustrations over stalled rebuilding are bound to surface. 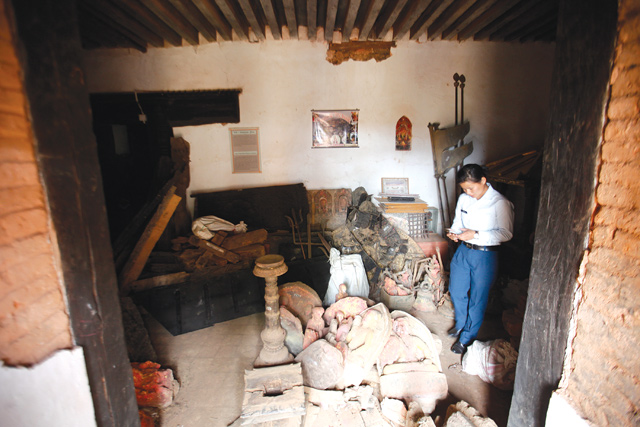 “The Director General of DoA has visited this place a number of times and every time he promises to expedite the reconstruction, but nothing has happened yet,” says local resident Birendra Kumar Shahi.

The Chinese government has signed a MoU with the DoA to rebuild the main palace and smaller buildings in the Nuwakot Darbar Square, while the DoA is responsible for rebuilding the temples. According to DoA Director General Bhesh Dahal, work in Nuwakot will start as soon as rebuilding of the Nautale Darbar in Basantapur ends. It is also being reconstructed with help from China.

Two years after the earthquake, it is clear that nothing has been done to protect the monuments, let alone start reconstruction or renovation. There is neither scaffolding to support the monuments nor tarps to cover the roof, whose leaking caused further damage to the interior. The south and west walls are supported by metal rods.

Stone statues and pillars are being housed on the ground floor of the palace, along with the museum’s artefacts, including the bronze statue of King Prithvi narayan and his two queens.  But many of the stone statues have been marked with numbers and they, along with exquisitely carved pillars, lay unprotected on the floor. 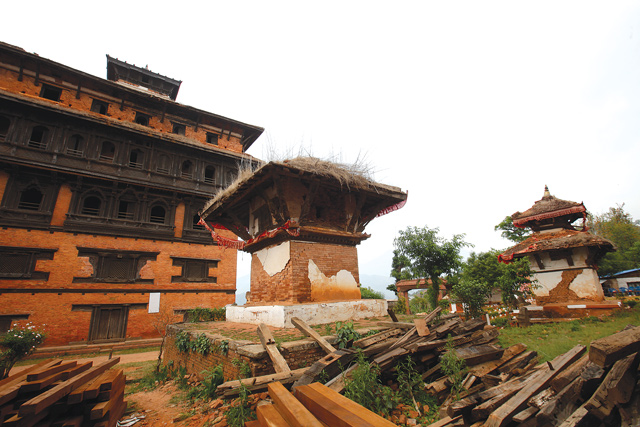 The timber salvaged from the Bhairabi temple, lies ouside unprotected.

The Nuwakot Darbar complex is on UNESCO’s world heritage tentative list and Christian Manhart, UNESCO country representative, says the government should at least work to protect the monuments. “I am not talking about the overall reconstruction: I am talking about covering the roofs with tarpaulins and supporting the structures with scaffoldings. It must be protected to prevent collapse. In its present condition, the palace will not survive another monsoon,” warns Manhart, who visited Nuwakot last month.

Temples and monuments too

The temples and monuments surrounding the Nuwakot Darbar, including the Garadghar with its unique soldiers’ frieze, are in no better shape than the palace. The roof of the Garadghar has completely collapsed and the structure may have to be completely rebuilt. A section of the exquisite soldiers’ frieze – carvings of Gorkha soldiers who took Kathmandu – lies buried under salvaged timber, which sits outdoors, unprotected.

The Taleju Bhagawati temple to the north was also ravaged by the earthquake and the idol has been moved to a makeshift structure. After the quake, the 400-year-old Bhairabi temple titled slightly to the left, but because it was neglected during the monsoon, the temple collapsed.

Locals worry that the palace complex may face the same fate as the rest house built during the time of Rana Bahadur Shah, grandson of King Prithvi narayan. Says local Surendra Kumar Shahi: “When the rest house started deteriorating, our fathers and grandfathers requested King Mahendra to restore it: although he gave the orders it was never restored. Given the government’s apathy, it will not be surprising if the palace complex vanished just like the rest house, erasing another part of history forever.”

Outsiders turn to insiders for insight, they ought to also read up
MANJUSHREE THAPA

Peace and development are two sides of the same brick. But how are we going to attain them?
HENNING KARCHER

We have to know what our destination is
CK LAL
Wow! It namely likewise fine treatise about JavaScript, babyliss pro curler I dissimilar Your post doesn't acquaint any sense. ray ban outlet uk if information are defined surrounded sketches one can effortlessly be versed with these. hollister sale I think a visualized exhibit can be better subsequently simply a effortless text, chanel espadrilles for sale that why it gives you improved quality. getnjloan.com Can you amuse forward me the code for this script alternatively interest distinguish me surrounded detail among relation apt this script? Vivienne Westwood online get a babyliss perfect curl Very soon this network sheet longing be outstanding among all blog viewers, isabel marant sneakers saleI too prefer Flash,