Bees are disappearing and need protection, not just for the good of the honey industry but also to pollinate our food
Sonia Awale 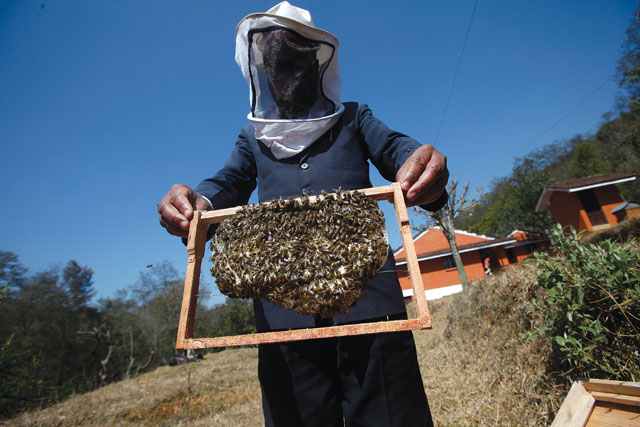 Pesticide use, disease and climate change are taking their toll on Nepal’s bee populations, threatening not just harvests of fruit, vegetables and grain, but also hurting the country’s indigenous honey industry.

Honeybee colonies in the US are dying at a rate of 30 per cent or more a year, and although the situation in Nepal is not as critical, apiarists here are ringing alarm bells. Of the 11 types of honeybees found in nature, four are native to the Himalaya, and Nepal also has colonies of European bees – all are being depleted.

Aside from affecting honey production, this has also drastically reduced the benefits to agriculture from cross-pollination. For instance, a survey in eastern Nepal showed that after beehives were introduced, production of cardamom rose by 45 per cent. “There are crops that can self-pollinate and those that need a pollinating agents and bees are the best pollinating agent,” explains Nepal’s foremost beekeeping expert, Gopal Prasad Kafle. But the increasing use of agro-chemicals, infections, extreme weather events, practice of monoculture farming, and some say even the spread of mobile phone towers, have lead to the decline in Nepal’s bee populations. 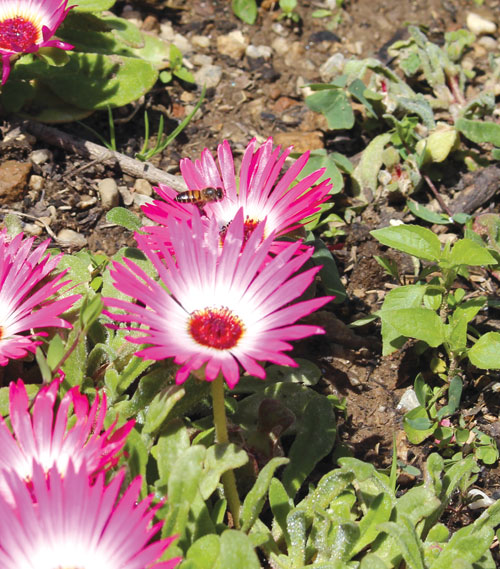 In the early 1980s, there was an epidemic of TSBV (Thai Sac Brood Virus) in Nepal, which nearly wiped out the population of Api cerena indigenous honeybees, but it rebounded within a few years. Today, the threat is more from pesticides, loss of bio-diversity and global warming.

“Climate change is among the environmental factors responsible for bee declines, so we have to find ways to cool the earth to save bees. Also, diseases like TSBV have no treatment. We have to keep bees strong biologically and pay special attention to their needs,” adds Kafle.

Nepal is known internationally for its wild hives, and the villagers in Lamjung who hang alongside cliffs to tap honey were made famous by Eric Valli’s documentary, The Honey Hunters of Nepal.  Dutch aid agency SNV started helping Nepal with a Beekeeping Development project in 1990 after King Birendra’s visit to The Netherlands, and a research centre in Godavari is involved in training beekeepers. 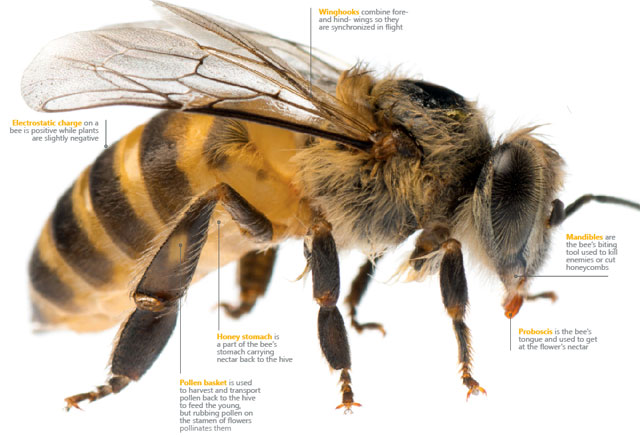 Dhan Bahadur Rawat, apiculturist at the Beekeeping Development Division in Godavari set up by SNV, says the government should encourage support for beekeepers and spread public awareness about the role of bees in pollination.

“If farmers knew they should place beehives close to their fruit farms, they could double their production and at the same time make money selling honey,” he said.

However, it is because farmers now understand the importance of beekeeping that there have been incidents involving competition for bee grazing. Last November, farmers in Dang destroyed 75 beehives worth Rs 1.8 million by spraying pesticides when farmers from Bharatpur brought their hives to graze there.

Every season beekeepers load their beehives on trucks and take them to different locations to make speciality honey in return for pollinating farmers' crops. Sometimes, as in Dang, there is disagreement over compensation. 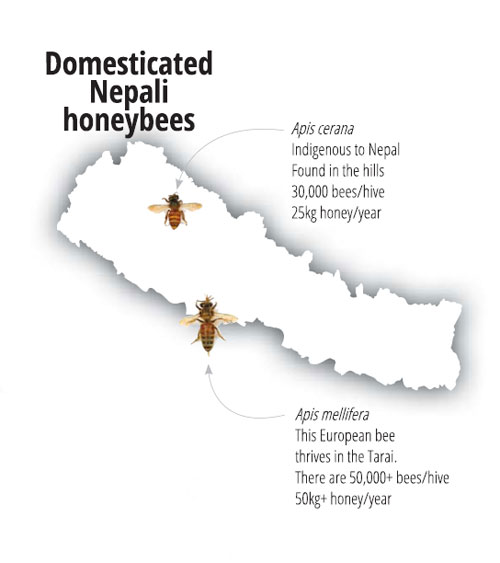 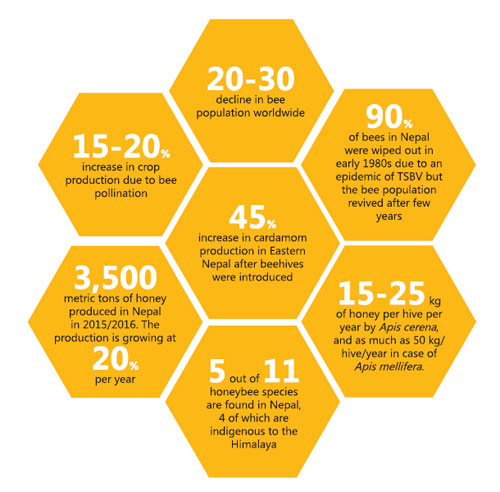 “Apart from obvious factors affecting the bee population, government  negligence in training beekeepers and a lack of interest in the wellbeing of bees has played a significant role in their decline,” says Sanu Bhai Basel of The Beekeeping Workshop in Godavari.

To conserve bee populations, scientists are trying to come up with solutions like hybridisation between different types of honeybees. Nepali farmers could also  diversify cropping, and switch back to organic pesticides and homemade fertilisers. 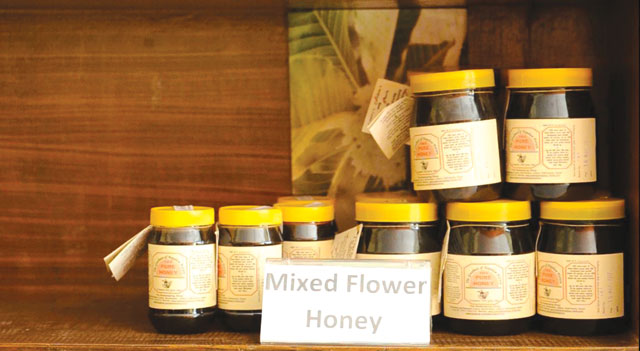 Out of 11 honeybee species, Nepal has five. While Apis cerana, Api laboriosa, Apis dorsata, and Apis florae are indigenous to the Himalaya, Apis mellifera is a European bee introduced in Nepal for commercial purposes 1990. While each species of bee is equally significant for pollination, only Apis cerana and Apis mellifera are useful for honey-making.

A hive of cerena, which is found commonly in the hills, contains approximately 25-30,000 bees while the one of mellifera contains 50,000 or more individuals. Mellifera thrives well in plains and can travel up to 5km to seek nectar in flowers, while the cerena flies only up to 1km.

Each hive of cerena produces 15-25kg of honey while a hive of mellifera produces up to 50kg per year. However, the European mellifera strain of bees are more susceptible to temperature changes and diseases than their Asiatic cerena cousins.

Nepal also has wild honey, and it has narcotic properties and honey hunters collect the natural sweetener from rock walls with limited equipment risking their lives. Honey from mellifera is cheaper and commonly found in the market in different flavours depending on the kind of flowers they graze on:

The Beekeeping Shop in Man Bhawan, Patan sells all these flavours of honey. 01-5547278.

TO BEE OR NOT TO BEE

Bee populations around the world have decreased between 20-30%, and scientists say the reasons are:

Decreasing abundance and diversity of flowers

Increasing use of pesticides

Spread of parasites by humans

In Nepal, the decrease of bees is not as severe as in other parts of the world, but there are warning signs it could be serious. Bees here mostly die due to pesticide poisoning, but also because farmers are switching to monoculture crops.

Recent research shows that some bees may be developing an immunity to chemicals and adapting to a rise in global temperatures. This could be good news, but scientists say counting on nature to take care of itself is not a solution. Evolution may be too slow to match the speed at which bees are disappearing.

Bees have a well-organised and complex social life. There are three bee types in a hive: the queen bee, the worker bee and the drone. The workers are female, the smallest and most numerous and are involved in cleaning, building, caring for the young, foraging for pollen and guarding the hive entrance. Drones are male bees whose main job is to mate with the queen after which they drop dead. The queen lays about 1,500 eggs a day and controls workers using pheromones.

No reason to fight anymore