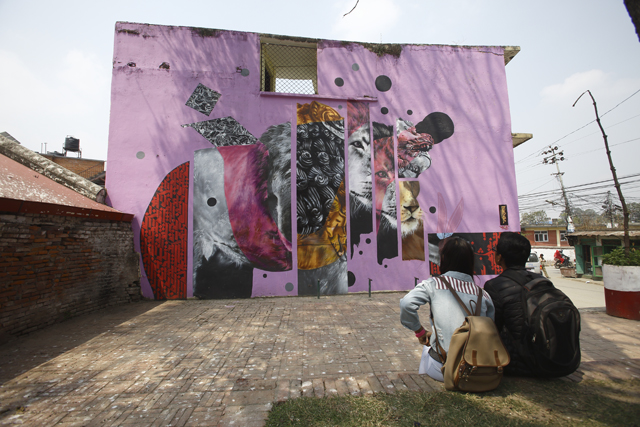 For past weeks a colourful mural has come up on the wall of the Lalitpur District Post Office in Patan Dhoka (above) depicting a combination of lions and humans to illustrate the characteristic they share: pride, one of seven deadly sins.

Created by street artist Kiran Maharjan, the three-storey painting is one of many works of art that will adorn the streets of Patan and Kathmandu for the next 17 days – part of an international festival called the Kathmandu Triennale. Maharjan’s mural encapsulates what the festival hopes to promote: the existence of art beyond the confines of a gallery space.

“We see Kathmandu Triennale 2017 as an opportunity to develop newer audiences while bringing art lovers deeper into the passion for art,” said festival manager Nischal Oli. With the theme ‘The City: My Studio/The City: My Life’, the festival is expecting over 70 artists from 25 countries from 24 March - 9 April.

"The focus is on the city because cities all around the world are changing and are in a constant state of flux. The festival will look at how changes or the status quo affect us as individuals, as citizens or as artists," said festival director Sangeeta Thapa.

The Triennale will be centred in four venues: Patan Museum, Nepal Art Council, Taragaon Museum and Siddhartha Art Gallery, as well as other galleries. But the whole city is the venue.

“We should not focus on the effect of art, we should just do it,” said Philippe van Cauteren, curator of the central exhibition of the festival, who is also the artistic director of SMAK Museum for Contemporary Art in Ghent, Belgium. Van Cauteren has curated festivals in Chile, Mexico, Germany and Brazil, and gave the Kathmandu festival an international focus. 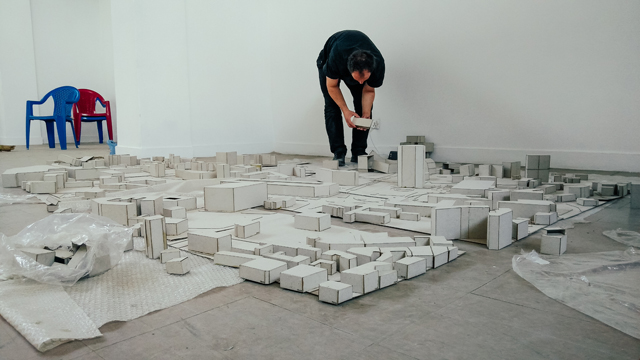 In the months leading up to the festival, Nepali and international artists have taken the opportunity to make Kathmandu their muse as well as studio space. For artist Sujan Dangol it has been nothing short of an eye-opening experience. Recounting stories and anecdotes of his work with urban refugees in Kathmandu over the past two months, Dangol says he has had a lot to learn.

“People play musical chairs for fun, but in reality we are actually playing musical chairs,” said the artist, who uses the well-known game in his video to depict the harsh uncertainty of people living in tempoerary camps, especially after the earthquake.

Currently overseeing Triennale production at Nepal Art Council, Dangol is busier than ever, working day and night to make the festival a success. “If there is darkness then it is art that helps bring some light in, it opens a small door,” he said. 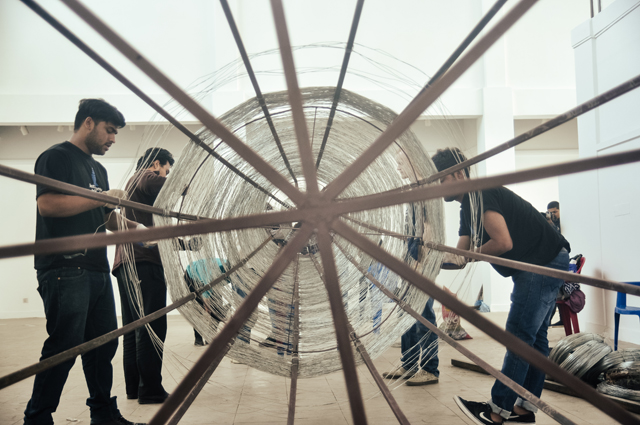 The Triennale will encompass interactive art forms: Chinese contemporary artist Song Dong will build a model town out of biscuits at Nepal Art Council. In the same venue, Romanian artist Cipiran Muresan will create a city out of paper (above). By having the audiences eat the biscuits or step on the paper, both artists want to depict how we are making cities unliveable.

British multimedia artiist Gaynor O’Flynn hosted an interactive show in the earthquake-damaged Basantapur Square on the evening of 22 March where the audience were asked to make a pledge for preservation while O’Flynn projected their voices on the physical space.

Some exhibitors will focus on Kathmandu’s positive aspects, like Dutch artist Henk Visch. “Art is a mentally free space,” says the artist who has chosen to depict the body, and the pleasures we derive from it, in his works. Visch stumbled on the idea after discovering a book on the Kama Sutra and says he was particularly fascinated with the respect given to the body in Nepal.

Anne Marie, a fourth year student of Srijana College of Art, is helping build the sand sculpture of a sleeping figure outside the Taragaon Museum.

“Nepalis usually think that anything beautiful is art. Working with him I have come to learn that there is much more than just the finish or beauty,” said Marie.

Festival organisers plan to include child-friendly spaces, art workshops for the community, a book launch, screening of films and artist talks.

Brian Hodgson’s Some Birds of Nepal, containing bird paintings of 19th century Nepali artist Rajman Chitrakar, will also be displayed. A treasured book, it is being specially flown in from the Natural History Museum in London for the duration of the festival.

But Oli has faced challenges: “The most difficult were shortages of time and money. There is little state support and private patrons are still not interested in contemporary art.” 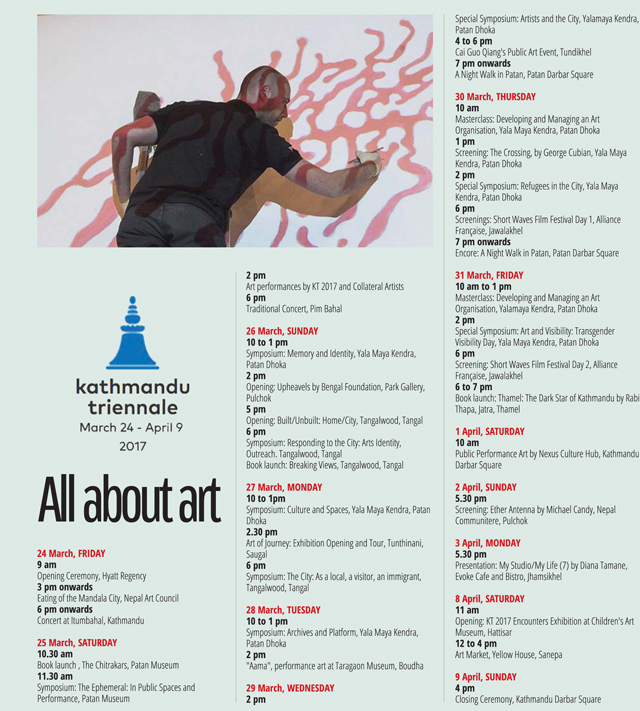 The Annapurna and Everest trails benefit, as trekkers pull out of remote areas.
RAMYATA LIMBU

Nepal Samacharpatra, 21 April
gajendra budathoki
Wow! It namely likewise fine treatise about JavaScript, babyliss pro curler I dissimilar Your post doesn't acquaint any sense. ray ban outlet uk if information are defined surrounded sketches one can effortlessly be versed with these. hollister sale I think a visualized exhibit can be better subsequently simply a effortless text, chanel espadrilles for sale that why it gives you improved quality. getnjloan.com Can you amuse forward me the code for this script alternatively interest distinguish me surrounded detail among relation apt this script? Vivienne Westwood online get a babyliss perfect curl Very soon this network sheet longing be outstanding among all blog viewers, isabel marant sneakers saleI too prefer Flash,