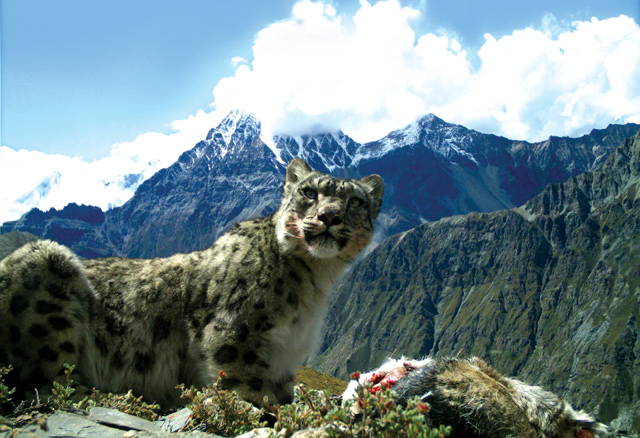 all Pics: Madhu Chetri
DROPPING IN: Nepali scientist Madhu Chetri was collecting samples of snow leopard scat last year in Manang to analyse prey composition when he came face-to-face with this female snow leopard feeding on a bharal kill. "I am not your enemy, I am trying to help you," Chetri told the leopard calmly in Nepali, and he was left alone.

Nepal has between 300-500 snow leopards left in the wild, and this is the fourth largest population after China, Mongolia and India. The animal’s range stretches across 12 Asian countries. 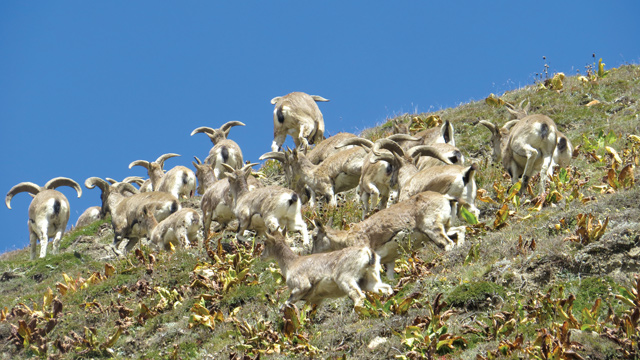 The snow leopard's favourite food is bharal, which it hunts in steep terrain.

Nepali scientist Madhu Chetri and colleagues at the Inland Norway University of Applied Sciences recently spent nearly six months in the Nepal Himalaya collecting snow leopard droppings to analyse their prey, and to find clues about human impact on their habitat. Chetri and his team published their findings in the journal PLOS ONE about the food habits of the rare cats.

The team collected scat samples of the snow leopard and its important sympatric predator of livestock, the Himalayan wolf, for DNA analysis to find out about their diet. The samples were sourced from 26 representative grids above 3,000m altitude over an area covering 5,000 sq km of the Annapurna and Manaslu Conservation Areas. 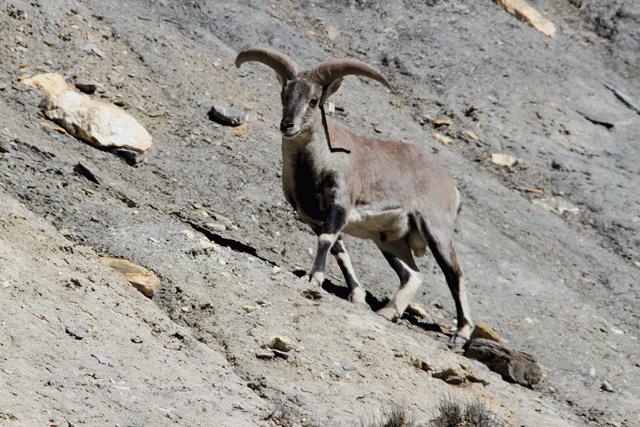 By the end of the field work, the team had collected more than 800 scat samples of snow leopards and wolves. The results showed that snow leopards preferred cliff-dwelling ungulates like the bharal (Himalayan blue sheep) and Himalayan tahr.

More than half the droppings had traces of the two prey. A significant 27 per cent of the prey of the snow leopard was made up of domestic animals like goat, horse, sheep, yak and lulu cow.

A quarter of the diet of Himalayan wolves was also made up of livestock, with horses being the preferred favourite. Remains of livestock occurred twice as frequently in scat of males as females. 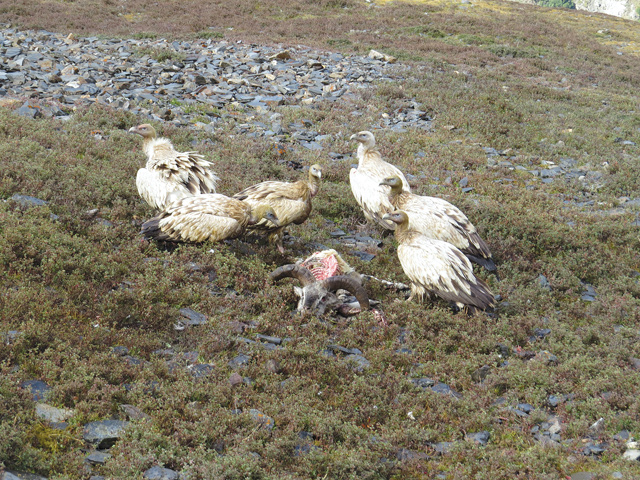 Himalayan vultures scavenge the carrion of bharal after the snow leopards and wolves are finished with it.

During his research, Chetri has had some hair-raising experiences of being face-to-face with a snow leopard. It was on his last day in the field in Manang when he was monitoring and guarding the kill of a snow leopard from Himalayan griffons. He remembers bravely looking the snow leopard in the eye and saying in soothing Nepali: “I am not your enemy, I won’t harm you, I am a friend trying to help you.” Chetri said it was the most mesmerising experience in his 15 years spent researching snow leopards in the mountains. 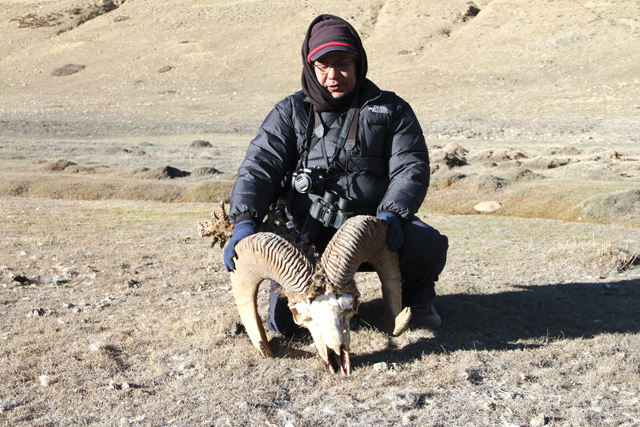 Madhu Chetri spent six months in the mountains collecting snow leopard droppings. Here he poses with the skull and horns of a Tibetan wild sheep killed by a Himalayan wolf in Upper Mustang at 4,800m.

Researchers also say there is an urgent need to find out more about wildlife diseases to prevent cats being infected by other wildlife and livestock sharing the same habitat, as happened to the Saiga antelopes in Mongolia recently.

The worldwide trade of snow leopards is totally banned by the Convention on International Trade in Endangered Species of Wild Fauna and Flora (CITES) putting it in Appendix I. Despite this, up to 450 snow leopards have been poached annually since 2008 alone. This could be an underestimate because many killings by poachers in remote areas go unreported.

Nepal recently released a Snow Leopard Conservation Action Plan (2017-2021) which will guide protection efforts for the next five years. The research by Chetri’s team could contribute to this effort and protect the elusive cat for future generations.

Militia in our midst

Potential spoilers in the peace process have been ignored
SUMAN PRADHAN
Wow! It namely likewise fine treatise about JavaScript, babyliss pro curler I dissimilar Your post doesn't acquaint any sense. ray ban outlet uk if information are defined surrounded sketches one can effortlessly be versed with these. hollister sale I think a visualized exhibit can be better subsequently simply a effortless text, chanel espadrilles for sale that why it gives you improved quality. getnjloan.com Can you amuse forward me the code for this script alternatively interest distinguish me surrounded detail among relation apt this script? Vivienne Westwood online get a babyliss perfect curl Very soon this network sheet longing be outstanding among all blog viewers, isabel marant sneakers saleI too prefer Flash,