On the fast track

A soldier paralysed during the conflict inspires others like him to stay positive and fulfil their dreams It was a nippy November afternoon in 2003. Lance corporal Himal Aryal was returning from a patrol in Makwanpur’s Sunachari. The Maoist insurgency was at its peak and the rebels were attacking security forces across the country. 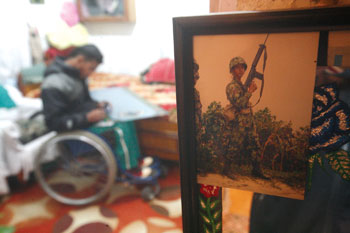 An army truck carrying the troops was about to reach Kulekhani when a landmine exploded, propelling Aryal in the air and disposing him on the roadside. All he remembers is seeing his fellow soldiers lying on the ground covered in blood. Before he could crawl any further, Aryal felt a throbbing pain in his head and then everything went dark. He woke up a week later at the Army Hospital in Chhauni and found out that the attack had left his lower body paralysed.

After four years in and out of the hospital, Aryal returned home in a wheelchair. That was not how the young soldier had envisioned his life when he joined the army in 2002 and he remembered the times when his family had begged him, unsuccessfully, to leave the security force. “Friends and relatives, who respected me because of my job, began avoiding me and my family and took pity on us. It was the most painful time in my life,” he recalls. 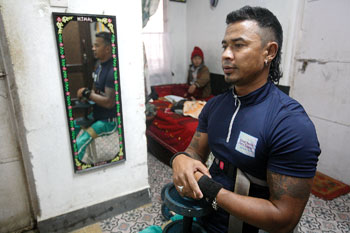 Aryal, however, didn’t let anyone or anything come in the way of his recovery. Even while he was being treated in the hospital, the native of Rupandehi, who had a keen interest in art since childhood, picked up his brush again as a form of therapy. After his first painting of a peacock sold for Rs 1,500, he was encouraged to pursue the hobby further.

To keep his mind occupied, Himal began vocal training and learnt to play the guitar. But regaining physical strength was equally important which led him to take up weight lifting and wheelchair basketball.

The fitness, stamina, and mental toughness that he built in the last six years have stood him in good stead at sporting events across the globe. In 2010, Aryal travelled to China to participate in a weightlifting competition where he met and interacted with athletes like himself who had won medals despite their handicap. “Every time I feel weak, I remember my fellow participants in China. Their stories provide me with the moral boost I need to pick myself up again,” explains the 34-year-old.

Currently a sergeant, Himal is posted Beni. He is thankful to the Nepal Army for helping secure a job for his wife in the military and for their constant support throughout his grueling journey.

Says Aryal:  “If I had chosen to blame my destiny, then I would have remained confined to my wheelchair. I hope my outlook towards life post-accident, inspires others to stay positive no matter how huge the barriers are.”

Out of the dark

Rajdhani, 17 April
Wow! It namely likewise fine treatise about JavaScript, babyliss pro curler I dissimilar Your post doesn't acquaint any sense. ray ban outlet uk if information are defined surrounded sketches one can effortlessly be versed with these. hollister sale I think a visualized exhibit can be better subsequently simply a effortless text, chanel espadrilles for sale that why it gives you improved quality. getnjloan.com Can you amuse forward me the code for this script alternatively interest distinguish me surrounded detail among relation apt this script? Vivienne Westwood online get a babyliss perfect curl Very soon this network sheet longing be outstanding among all blog viewers, isabel marant sneakers saleI too prefer Flash,