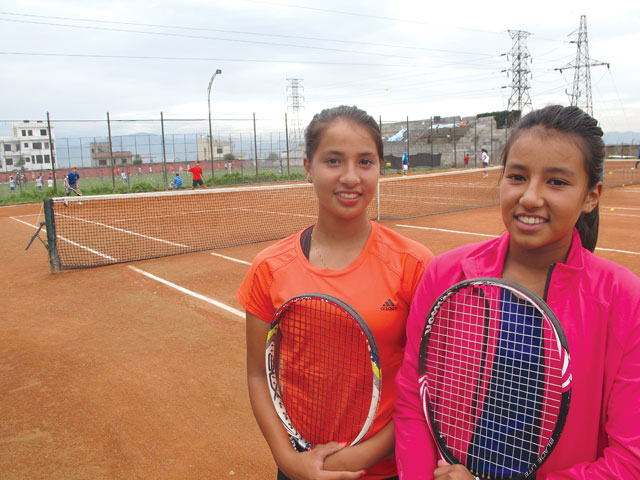 KUNDA DIXIT
Those in Nepal watching Serena Williams playing her sister Venus at Wimbledon last week probably didn’t know that we have our own tennis sisters – and they are twins! Born into a family that was active in the All Nepal Lawn Tennis Association Mayanka and Mahika Rana started playing on clay when they were barely six. They haven’t looked back since.

“Our parents introduced us to this game and we love it,” said Mahika, the younger twin during a water break from the practice at Satdobato this week.

Over the years the twins have won many age group singles and doubles titles and national championships. In April Mayanka won the Sahabir Memorial Open where she defeated her twin sister in a tightly fought final match. The 14-year-olds also hold title of national doubles champions.

The sisters are particularly fond of playing together as a doubles team and have accolades to prove their excellence in the court as partners. “I think we play great together, we understand each other well,” says Mayanka. But more often than not they have to play against each other in singles matches when understanding the opponent too well can also be a disadvantage.

“We have played many times against each other. But I’m not as confident while playing with her as when I’m playing against others,” Mahika told us, with a wide grin. Last year they were selected to represent Nepal in the Asian Games in South Korea. Although they lost in straight sets in the first round, their coach Jitendra Pariyar says there is lot more to be hopeful about them given their age and level of their game.

“They are working hard and the way in which they are performing, we certainly have positive expectations,” says Pariyar, a national champion himself. “I believe tennis has a great future in Nepal because of how good these junior players are, of course a little more government support would help.”

Tennis is often eclipsed by cricket and football and hasn’t gained mass appeal in Nepal. But back in 1984, Sujay Lama was selected in the Junior Wimbledon and ranked 50 in the ITF junior ranking.

“Mayanka and Mahika may be twins but they play mirror opposite games. Mayanka is mentally stronger, prepares brilliantly for matches," says Pariyar, “Mahika on the other hand executes her shots a lot better and she is physically in better shape.”

The twins’ mother, Jyoti Rana beams with pride as she watches her daughters practice at Satdobato. As a former player herself she knows the struggle the girls have to go through. “They are in Grade 10, and they have to study and practice, but the school has been really supportive,” she adds.

With their goals set so high, we may as well start getting used to the names Mayanka and Mahika from Nepal in the international tennis circuit in a few years.