Nilam’s activism against abuse has left her ostracised by her own community as she continues to try to convince Muslim, Dalit and minority families to protect and educate their girls
Sonia Awale in UDAYPUR 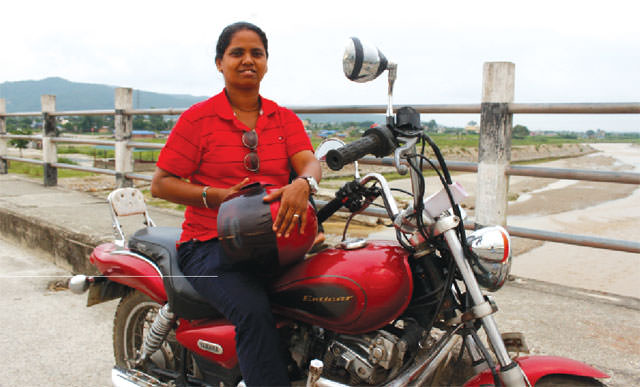 In a town where the sight of Tharu women in saris carrying earthen pots on their heads is commonplace, a woman in a red polo t-shirt and dark jeans riding noisily down the street on a 125cc Enticer raising a cloud of dust seems a bit out of place. But the people of Gaighat have become used to Najbul Khan Nilam zooming around on her two-wheeler.

On a short bike ride from Triyuga Bridge into town recently, dozens of people waved to her as she roared past. Policemen beckoned her to stop and chat: the discussion was about upcoming elections and the health needs of local women.

“A lot has improved here in the last few years: the maternal mortality rate has declined, girls are not trafficked as much anymore,” Nilam explains, shouting to the pillion rider on the back.

The 37-year-old Muslim woman has battled gender, class and religious discrimination all her life, rescuing women victims of domestic violence, or rushing pregnant women to hospitals.

As a rebellious teenager, Nilam was thrown out of her house when she expressed her desire to study. Her brothers set fire to her books and school uniform. That is why she has worn shirts, jeans and sports shoes ever since as an expression of her freedom. She taught herself to drive a Tempo and plied the Gaighat-Jaljale route to earn a living, while attending adult literacy classes.

She set up Muldhar Mahila Sewa Kendra, which provides 24-hour help and shelter to battered women and victims of trafficking. Her motorcycle isn’t just a symbol of her independence, but serves as an ambulance and a rapid-response rescue vehicle.

But Nilam’s activism against abuse has left her ostracised by her own community as she continues to try to convince Muslim, Dalit and minority families to protect and educate their girls. 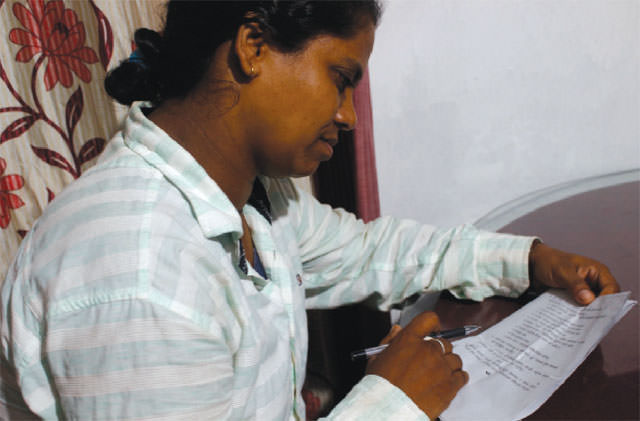 “I don’t want young girls to go through the same hardships I did. I would like them to have the support of their family. Despite my past, I’m happy that I have been able to send my younger cousins to school and be looked upon as an inspiration by the same society that once cast me out,” she says.

In the past decade, Nilam has seen the needs of women in this rural inner Tarai district change. With social media like Facebook, many girls are now falling victim to cyber predators waiting to abuse young women or lure girls to migrate. She sees an urgent need for media literacy, especially among young rural women.

Nilam finally graduated from high school after multiple attempts, and is now an undergraduate student of rural development and social work. “This is the happiest day of my life,” says Nilam, leafing through the question paper she attempted earlier that day (above). “I never thought I would be going to college one day. Now I feel like I can do my masters too.”

Nilam’s organisation is no longer confined to Udaypur, but is running a nationwide campaign for gender equality and inclusiveness with the slogan ‘Asan ma mahila, bhasan ma mahila, sasan ma mahila (Women in charge, women in the mainstream, and women in government). The campaign is spread over 24 districts, and has recently been trying to encourage women's participation in elections.

“The government has to be much more serious about the involvement of women in policy-making and local governance, and we need to keep fighting for equality and equity,” she says with conviction.

“There is still a long way to go, but I know from experience that every obstacle can be overcome,” she adds.

Pay or not pay

Nepali women are paying brokers to be sold to Korean 'husbands'

From the frying pan?

The Maoist class war could turn ethno-separatist if the comrades aren't careful
PURNA BASNET
Wow! It namely likewise fine treatise about JavaScript, babyliss pro curler I dissimilar Your post doesn't acquaint any sense. ray ban outlet uk if information are defined surrounded sketches one can effortlessly be versed with these. hollister sale I think a visualized exhibit can be better subsequently simply a effortless text, chanel espadrilles for sale that why it gives you improved quality. getnjloan.com Can you amuse forward me the code for this script alternatively interest distinguish me surrounded detail among relation apt this script? Vivienne Westwood online get a babyliss perfect curl Very soon this network sheet longing be outstanding among all blog viewers, isabel marant sneakers saleI too prefer Flash,