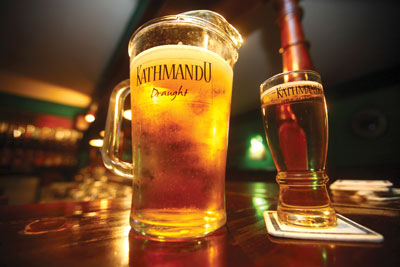 Himalayan Brewery has recently introduced Kathmandu Premium Lager, which is also available in draught. Draught beer is said to be best consumed within three-four days or up to a week of brewing. If it is maintained at the right temperature of 38F, it can stay fresh till 30-40 days as well. Beer consumption in Kathmandu has been increasing by five to ten per cent every year.

Ashish Pradhan, Brand Head at Himalayan Brewery says, “If you have the option to drink fresh beer, why would you drink the bottled beer? Draught Beer has a clean, crisp yet authentic taste.”

Made with 100% 2-row malt, which is preferred by European Brewerers, it gives the beer a heavier and better taste on the palate.

Draught beer skips the final process of pasteurisation unlike bottled or canned beers. The freshness gives it a shorter shelf life but provides a more bona fide taste for those who appreciate a good beer.

Pradhan adds, “Beer drinking has become more of a lifestyle and consumers have understood the significance of draught. An average beer consumer today has more diversified knowledge about beers.”

Pradhan predicts microbrewing and homebrewing may be the next thing to look forward to in Nepal.

Sanjay Shrestha of House of Music, Thamel recognised the potential popularity of Kathmandu Draught Beer. “The first day we got draught beer, everyone chose draught beer over bottled beer. If the company can keep up with the quality and continuity as they have so far, I think the market is there," says Shrestha. "It is something new, and people want to try that.”

Irish Pub in Lajimpat sells four to six kegs of Kathmandu Beer in just a night says Umesh Pun, a bartendar at the bar. Kathmandu Beer is available on tap at Irish pub, House of Music and Bunker Hill.

The best course might be for Kangresis to amicably dissolve the party.
PUSKAR BHUSAL

Elections arent only about winning, the UML may soon find.
PUSKAR BHUSAL
Wow! It namely likewise fine treatise about JavaScript, babyliss pro curler I dissimilar Your post doesn't acquaint any sense. ray ban outlet uk if information are defined surrounded sketches one can effortlessly be versed with these. hollister sale I think a visualized exhibit can be better subsequently simply a effortless text, chanel espadrilles for sale that why it gives you improved quality. getnjloan.com Can you amuse forward me the code for this script alternatively interest distinguish me surrounded detail among relation apt this script? Vivienne Westwood online get a babyliss perfect curl Very soon this network sheet longing be outstanding among all blog viewers, isabel marant sneakers saleI too prefer Flash,