"I had no idea in 2011 that Candy Crush was going to be played by millions of people around the world." 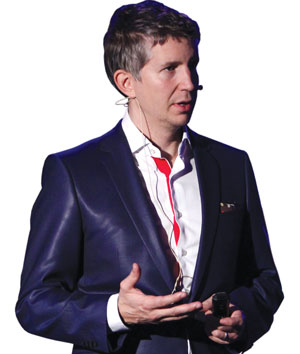 More than 70 million people around the world play Candy Crush Saga every day, 700,000 of them are in Nepal – one of the largest numbers in any country in the world.

Last year, Swedish company Kings Digital Entertainment which owns Candy Crush made 1.8 billion dollars in revenue, most of it came from the social mobile game. Even after two years of release, the game’s popularity continues to grow with daily installations crossing well over 50,000.

With the exception of North Korea, the game is played in every country in the world, even in the continent of Antarctica. What is it about the game that has transcended geographical and cultural boundaries to become the most played game the world has ever seen?

“I think it struck a chord with people of all ages and countries because of its simplicity and accessibility,” Game Guru of Kings, Tommy Palm (pic) said in an exclusive interview with Nepali Times. “I had no idea in 2011 that it was going to be played by millions of people around the world.” Palm was in Kathmandu for the Ncell App Camp and spoke on Saturday at the Everest Hotel.

Candy Crush is free to download and play, and because it is a cross platform game, users can easily switch from playing on the phone to computer or even tablet. It makes money from in-app purchases of extra moves, lives and boosters.

Statistics show that women between 25 to 55 are the most loyal players, and spend longest time playing it. Palm admits it is the first game that he developed which even his mother and sister play.

“There are already a lot of games for men in the market, but very few for women so it is not hard to see why women play it the most,” explains the Swedish programmer. The parent company Kings has developed a niche market for non-violent computer games and young women are an important target group.

Palm, who started developing games in the 90s, is a self declared geek. He began playing games at seven and by the time he was 12, had already started programming. Like a stereotypical gamer, he spent most of his time in his room, curtains drawn, eyes on computer causing his parents to repeatedly ask him to be more outgoing.

Palm doesn’t like the word “addictive” to describe the game the whole world is playing, he prefers “engaging”. He says the trick is to make people want to come back, and to challenge them. However, when so many people spend so much time playing the game on-screen, doesn’t it take them away from reading and face-to-face social interactions?

“It is important to do everything in moderation,” Palm explains, with the air of someone who has answered this question many times before, “just because you have games doesn’t mean you don’t need friends or a social life. Being a book worm is also not very sociable.”

Because of the game’s popularity, Ncell thought Tommy would be perfect to speak at the Ncell App Camp. “The main aim of the App Camp is to encourage Nepali app developers,” says Ncell’s Sanju Koirala, “and Tommy is a great role model and we believe his presence will boost the event.”

A Swedish company, Kings has always looked outside its borders for revenue earning. Something Nepali developers will need to start doing to truly make their apps global. “We live in a really exciting time with so much potential in start-up business. If you have talent in doing something that can go global, now is the time,” said Palm to the finalists of the Ncell App Camp on Saturday.

Nepal’s social media networks were abuzz as word spread that Palm was in town. With 4.5 million Facebook users, Candy Crush is benefiting from the spread of smartphones and mobile internet.

obhana Shrestha is an avid player, and says she got hooked to the game while nursing her baby. “He would get up and cry at odd hours, and I had to wait until he went back to sleep, and started playing the game,” she adds.

Many Nepali players want to know: will the saga ever end? “Not anytime soon,” says Palm, “we will keep on adding more levels as long as there is still interest in the game.”

Improve your swing and get the ball flying
DEEPAK ACHARYA

Nepal Samacharpatra, 12 July
Wow! It namely likewise fine treatise about JavaScript, babyliss pro curler I dissimilar Your post doesn't acquaint any sense. ray ban outlet uk if information are defined surrounded sketches one can effortlessly be versed with these. hollister sale I think a visualized exhibit can be better subsequently simply a effortless text, chanel espadrilles for sale that why it gives you improved quality. getnjloan.com Can you amuse forward me the code for this script alternatively interest distinguish me surrounded detail among relation apt this script? Vivienne Westwood online get a babyliss perfect curl Very soon this network sheet longing be outstanding among all blog viewers, isabel marant sneakers saleI too prefer Flash,