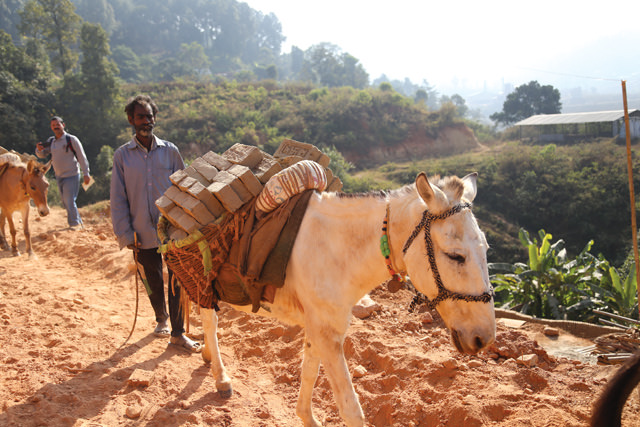 Mules have longer ears than their parents. They have great perseverance and endurance.

Soon after sunrise on a chilly winter morning, the donkeys are getting ready for another day carrying bricks at a kiln in Dhading. All day, they carry loads of up to 45kg of freshly-baked red bricks, making more than 30 roundtrips up and down the hillside. Some of them have their fore and hind legs tied so they do not stray.

During the brick season from December to June, thousands of equines together with their child handlers, come from India to work in the 300 or so kilns in Kathmandu and surrounding districts. Brick factories pay owners according to the number of bricks they deliver every day, and there is a tendency to overwork the animals. 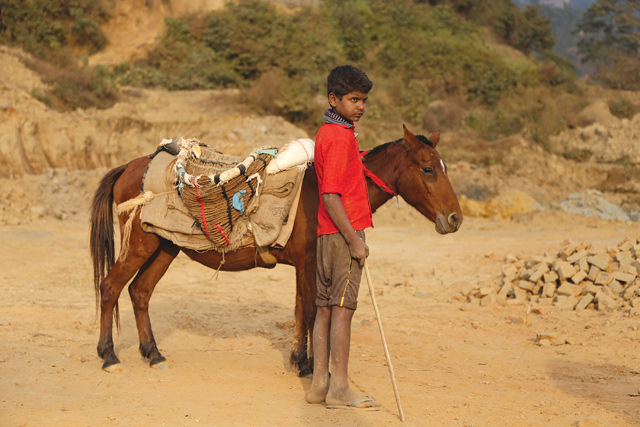 Birwa is a 15-year-old from India just arrived in Kathmandu Valley. He and his mule will work here till June.

Eight years ago, activists from Animal Nepal started working for the welfare of donkeys and mules toiling in brick factories. Nineteen factories in Dhading currently get help from Animal Nepal and UK-based The Donkey Sanctuary, whose Equine Outreach Program currently helps 21 donkeys, 359 mules and 177 horses in the district.

Atish Kumar Yadav from Animal Nepal explains that education includes telling owners that cutting donkey’s ears does not prevent tetanus, and to ensure that the animals are properly fed.

Says Yadav: "We have found equine owners are now more conscious about the health of their animals. They call us more frequently, and they believe in us. Factory owners now provide money every week for nutritious food for the animals."

Indian equine owner Ajmal Kasgar has just brought 24 mules and 6 horses to Dhading for the season, each costing up to Rs70,000. 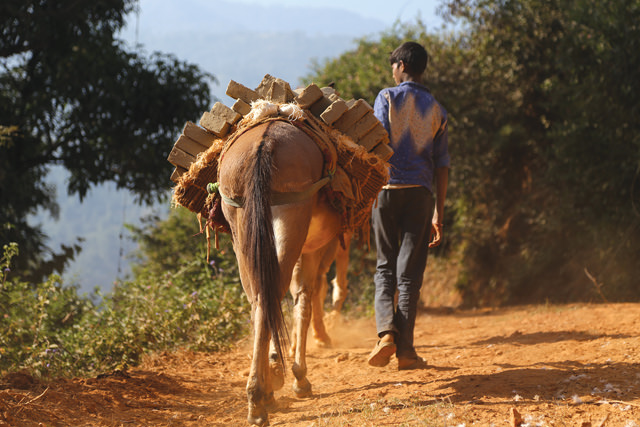 Each donkey ferries up to 45kg of bricks to the furnaces for baking.

“Mules have incredible perseverance and endurance, that is why I prefer them,” says Kasgar, who will sell the mules to Nepali villagers for ferrying work in the mountains. He will take the horses and donkeys back to India during the monsoon. Kasgar says business is flourishing because of the post-earthquake demand for bricks for reconstruction. 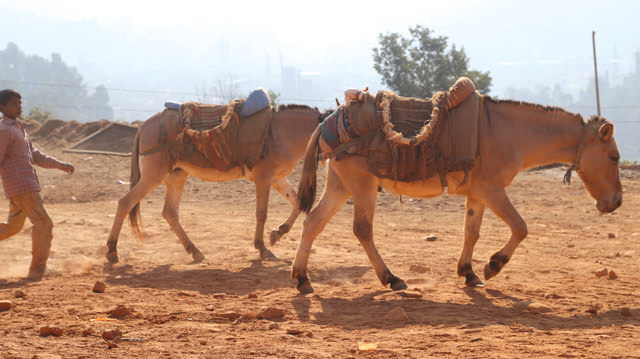 A handler guides newcomer mules just arrived from India to a brick kiln near Kathmandu for a winter of hard labour.

Bharat Adhikari, who owns the Raktakali Brick Factory in Dhading, confirms that the brick business is thriving, and adds that many kilns are moving out of Kathmandu because of congestion. As demand increases, Adhikari is now planning to phase out mules and mechanise transportation.

Genetically, it is easy to differentiate donkeys, mules and horses. Donkeys have 62 chromosomes, mules have 63 while horses have 64. Donkeys are the hardest to breed, because typically a donkey only gives birth to a single foal after a year of pregnancy. Like humans, donkeys tend to get stressed from overwork, have small family groups and need space to walk around.

Mules are offspring of female horses and male donkeys. They have been used by humans for centuries as load-bearers and cart-pullers. Mules possess characteristics of both parents, including perseverance and endurance, but are unable to reproduce. They have a longer lifespan and longer ears than their equine cousins. Their mothers, horses, are herd animals and tend to spend their time in large groups while donkeys tend to form bonds with only one other of their kind.

Besides being in demand as beasts of burden, donkeys are also wanted in China, where the skin of the animals is used in a traditional cosmetic called ejiao to make people look younger. 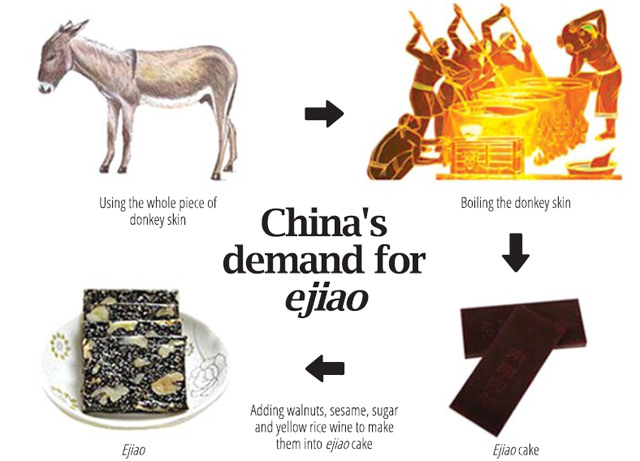 According to the latest donkey skin trade report by The Donkey Sanctuary UK, donkey populations worldwide are facing a crisis due to increased demand from China, where the population of domestic donkeys has dropped from 9.4 million to 5.4 million in the last 20 years. Demand in China is 4 million donkey skins a year, with the largest manufacturer of ejiao, Dong’e Ejiao, alone consuming 1.5 million skins annually. China produces only 1.5 million donkey skins annually, the rest have to be imported.

Ethiopia, Kenya and Niger, where donkeys are vital for fetching water, are losing their donkeys to the Chinese market, while some Chinese companies have set up slaughterhouses in Ethiopia to export donkey skins to China. “They bring the donkeys in trucks and kill about 200 of them every night, pack the skin and transport them by sea to China,” Bojia E Duguman of The Donkey Sanctuary Ethiopia told the Asia for Animals Conference in Kathmandu last week.

Although there is no evidence that Nepali donkey skin is being smuggled into China, Alex Mayer of The Donkey Sanctuary UK says that Nepal should start taking precautions because the market for the skins is right next door. “Nepal can act now to stop the flow of donkeys coming from India to China,” Mayer said, adding that Nepal needs its donkeys for transport as well as to produce mules.

Back to Jungle, NIRMAL GHOSH

Tihar is here, take a bet on the market value of professional gambling

Rukum after the sweep

Three weeks after the armys operation, the Maoists are back in their strongholds in midwestern Nepal
MAARTEN POST in RUKUMKOT

A delicate balancing act and a daily struggle to feed his family
KISHORE NEPAL in MUGU
Wow! It namely likewise fine treatise about JavaScript, babyliss pro curler I dissimilar Your post doesn't acquaint any sense. ray ban outlet uk if information are defined surrounded sketches one can effortlessly be versed with these. hollister sale I think a visualized exhibit can be better subsequently simply a effortless text, chanel espadrilles for sale that why it gives you improved quality. getnjloan.com Can you amuse forward me the code for this script alternatively interest distinguish me surrounded detail among relation apt this script? Vivienne Westwood online get a babyliss perfect curl Very soon this network sheet longing be outstanding among all blog viewers, isabel marant sneakers saleI too prefer Flash,