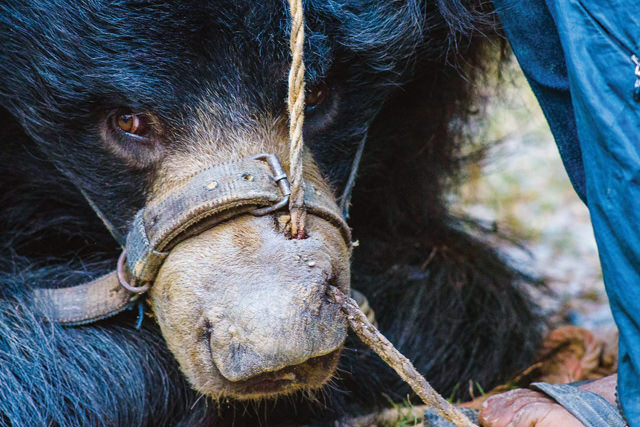 Sloth bears Rangeela and Sridevi had their noses pierced with a hot iron rod and a rope tied through the cavity when they were both seven months old. But thanks to the efforts of the Nepal police their years of torture and captivity have ended.

Authorities apprehended the last two known dancing bears in Nepal and their owners at 9pm on a foggy winter night Tuesday on the outskirts of Gaur. They had been on the run for four days, travelling 160km across the eastern Tarai from Sukhipur of Siraha District.

With the use of sophisticated cell-phone tracking by the Central Investigation Bureau and information from animal welfare activists, the Rautahat police in Gaur were able to geolocate the bears’ owners, before moving in to make the arrest this week.

The Jane Goodall Institute Nepal provided crucial ground intelligence on which the local authorities in Simara could act. Two trackers from the foundation had been following the bear owners from Siraha pretending to be buyers of herbal remedies. Gaining the trust of the owners, the trackers were able to obtain video footage of the dancing bears and maintain close contact with family members and the owners themselves.

Rangeela, a 19-year-old male, and Sridevi, 17, were fed a diet of milk and rice two times a day. They were controlled by the nose with a piece of rope while the owners carried sticks to keep the bears in check. Poached in the wild in India as cubs, the bears had their canine teeth removed, and suffered trauma and injuries throughout their lives because of harsh training methods. 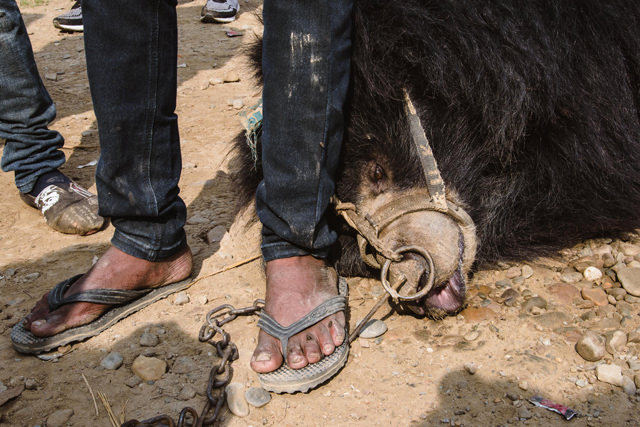 Dancing bears are forced to perform in front of crowds, standing on their hind legs and swaying left and right. The pace of the dance is controlled by tension on the rope through their nose.

Performing bears were banned in India in 1972, and in Nepal a year later. Rescued bears are often sent to sanctuaries in Agra and Begaluru in India.

At the Gaur police station after being rescued, the bears showed visible signs of stress and aggression, cowering, pacing and sucking their paws. “They are clearly upset: pacing up and down, making noises and jumping on benches,” said Neil D’Cruze of World Animal Protection (WAP), an expert on captive sloth bears who has rehabilitated bears in India. 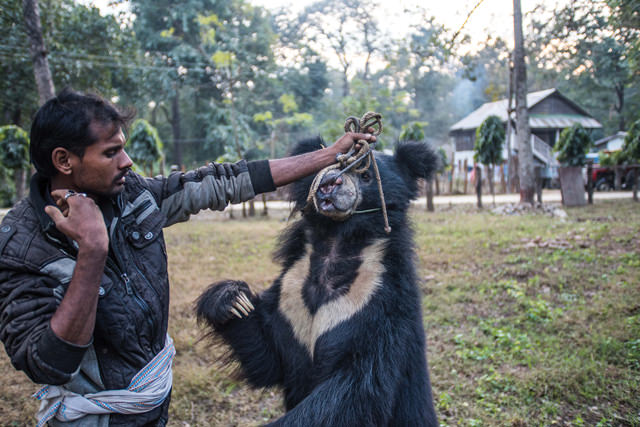 “It’s really tough, watching the condition of the bears. The only positive note is that very soon the bears will be off to somewhere they can live the rest of their lives happily,” he added.

Nepal's National Parks and Wildlife Conservation Act 1973 banned the possession of sloth bears for dancing, however on the fringes of society in Nepal and India the illegal practice continued because law enforcement turned a blind eye. 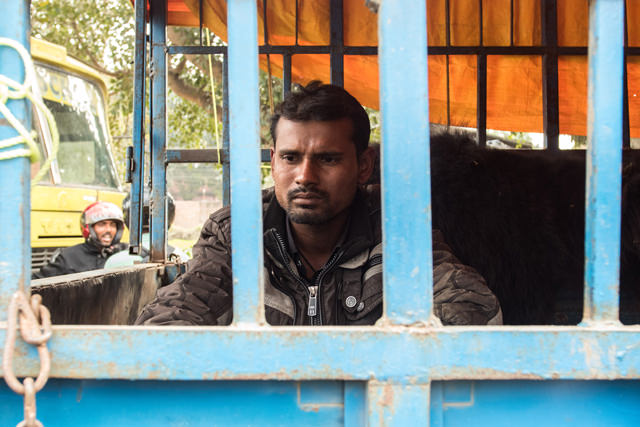 Anyone caught with sloth bears faces a Rs10,000 fine and Rs40,000 bail upon arrest, but in this case the bear owners cooperated with the authorities and were released. Rangeela and Sridevi were taken to Parsa National Park, where they will be temporarily cared for.

The two are believed to be the last dancing bears in captivity in Nepal. Said Police Superintendent Yagya Binod Pokharel in Gaur: “This is not a deliberate, organised crime, but rather the remnant of a practice that has been going on even though it was criminalised over 40 years ago.” 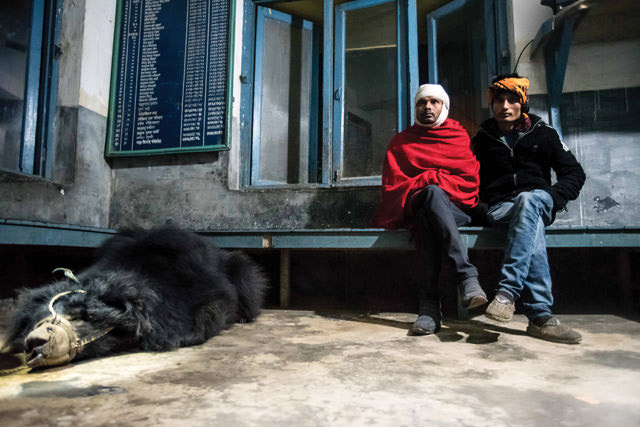 Along the porous, Tarai border between Nepal and India, owners of illegal dancing bears have been dodging the police ever since the practice was banned in 1973. Yet on both sides of the border, circus bears have been performing, moving from the cities to the hinterland.

Over the years income from bear dancing fell, and some animal owners abandoned their ancestral profession while a few holdouts remained. The organised practice of bear-dancing faded out in India in 2009, and in Nepal this week . 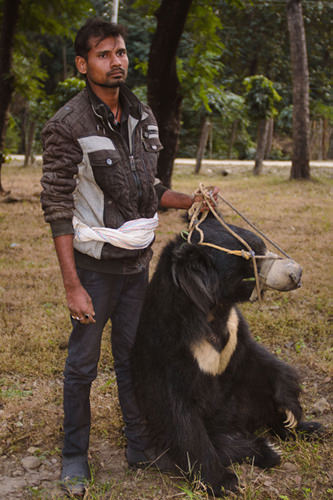 Under cover of the impenetrable Tarai fog Saturday morning, four bear owners left their home village of Sukhipur in Siraha District and led Rangeela and Sridevi onto a public bus on the East-West highway. They had been using performing bears as a source of income for generations. Contacted by animal welfare activists from the Jane Goodall Institute, who were offering a friendly handover of the bears in return for compensation, the suspicious owners decided instead to flee westwards with the bears.

Mohamad Saabir, Mohamad Momtaz, Mohamad Salman and Mohamad Afzal Khan, aged 13-21, belong to one of the last families in Nepal to have dancing bears as a source of income. The Khan family are Madari Pathan people, and are closely related to the Kalandar bear-keepers of North India. Although the women and older men of the Khan clan are sharecroppers near the town of Lahan, the younger men never settled, living a nomadic, hand-to-mouth lifestyle unchanged since the 16th century, taking the bears from town to town.

“We only work with bears, it is passed down from my grandfather,” says Rijwan Khan, a brother of the detained bear owners, who says people pay him Rs10 to see the animals, but some tourists give him up to Rs500.

Year-round, the bear owners travelled throughout the Tarai, between Mechi and Birganj, sometimes even hitch-hiking to Pokhara. As recently as 10 years ago it was socially acceptable to see bear-dancing on the side of highways, but the practice began dying out. Bear dancing was the Khans only stable source of income but now even it is gone.

Ownership of the bears was more than a source of income, it also provided a sense of pride. Mohamad Saabir was weeping as the bears were led away at the Gaur police station. “Will you look after the bears?” he pleaded with the police. “Please be kind to them.” 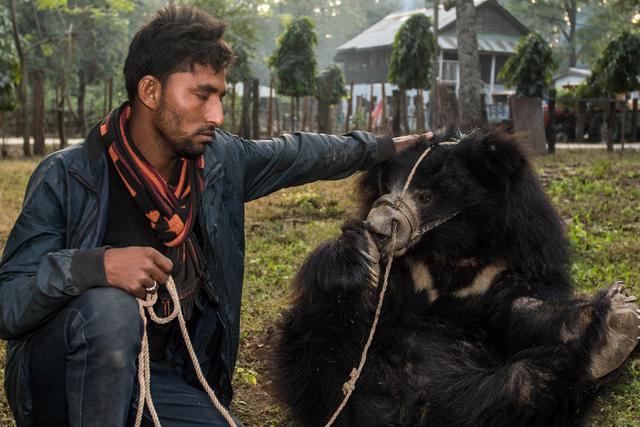 Despite the pain and confinement, the bears have been a large part of the owners’ lives. They have been companions, pets, and a major part of the Madaris’ reputation as travelling entertainers. With generations of bears passed down from father to son, and as brutal and barbaric as the practice may seem, it is their heritage.

“What do we eat and how do we eat now? All of our earnings are gone,” said 13-year-old Afzal, who had been following his brothers’ footsteps and would have been a future bear owner himself.

“Confiscating bears from their owners is like telling a touring rock star to part with his favourite guitar,” says sloth bear expert Neil D’Cruze of World Animal Protection, who was involved in this week’s rescue. 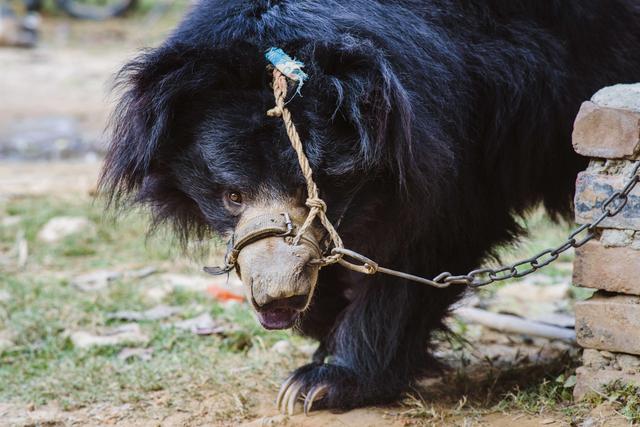 Manoj Gautam of the Jane Goodall Institute Nepal pulled Afzal aside and told him that the confiscation of the bears may be “the best thing to happen” to a boy of his age. Gautam told us: “This is not the future: he should be in school, learning and being exposed to new things, and choose his own path.”

According to Gautam: “It’s not about separating particular groups from their livelihoods, but making them realise they have many other options that do not involve inflicting pain and cruelty.”

The Jane Goodall Institute has rehabilitated two of the bear owners as legitimate bear-carers at Parsa National Park. They will earn Rs 700 a day until the bears are permanently resettled.

Instead of yearning for the best leaders, we should try make those we do have more accountable
ASHUTOSH TIWARI

Rajdhani, 21 April
Wow! It namely likewise fine treatise about JavaScript, babyliss pro curler I dissimilar Your post doesn't acquaint any sense. ray ban outlet uk if information are defined surrounded sketches one can effortlessly be versed with these. hollister sale I think a visualized exhibit can be better subsequently simply a effortless text, chanel espadrilles for sale that why it gives you improved quality. getnjloan.com Can you amuse forward me the code for this script alternatively interest distinguish me surrounded detail among relation apt this script? Vivienne Westwood online get a babyliss perfect curl Very soon this network sheet longing be outstanding among all blog viewers, isabel marant sneakers saleI too prefer Flash,