Born in the 1970s (BS), inching closer to brilliant centuries (one has already crossed the landmark), three great grandparents recall their childhood and retell stories of the black and white era. They miss the open skies and clean water, but are happy with how far women have come. 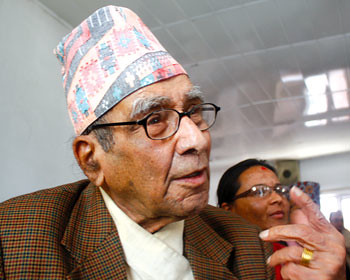 DEVYANI SHIWAKOTI
I spent my childhood playing with friends and cousins, surrounded by mountains, rivers, and trees in Pustun village of Lamjung district. We didn’t celebrate Bikam Sambat new year in Pustun at that time. Dasain used to be the biggest festival and I used to get very excited about it. Since there were a lot of Gurungs in our village I was more fascinated by their calendar where each year is denoted by different animals.

I was still a teenager when I ran away to Kathmandu. Back then the capital was called ‘Nepal’ and I was enthralled by stories people told me about the valley. After coming here I learnt that new year is celebrated as a public holiday.

Today we celebrate new years of various ethnic groups as a national holiday, which is amazing. We are learning to value our diversity and transforming into a rainbow nation. Such togetherness will help break barriers and lessen social inequalities.

Life was very simple then compared to the pressures of modern life. Technology has put the whole world on our palms, but people still seem very distant sometimes.

No matter what era we live in, life is always full of joys. One just needs to know how to make the most of it. 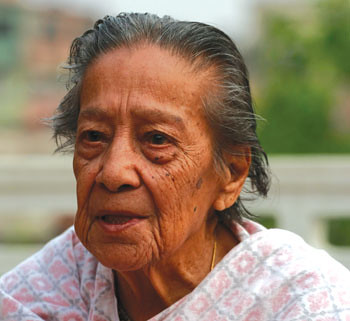 BIKRAM RAI
I will turn 100 in two years. It is hard to believe how quickly time has passed. I remember moving to Dillibajar from my parents’ home in Dhoka Tol when I got married at nine. Back then Dillibajar was an open field, there were maybe four or five houses around and it used to get scary after dark, wolves would howl every night. Imagine that! Now I see giant apartments everywhere, I wonder how water and electricity will reach these buildings, the Valley already suffers from severe shortages.

Hundred years ago, education was a luxury for most Nepalis, especially women. Being able to count from 1 to 1,000 and recite a few verses in Sanskrit was the most a girl could hope for. I was lucky to have parents who strongly believed in educating their daughters and sons. They home schooled me even after I became a widow at 15 with an eight month old son in my lap. I realised that keeping us indoors and not letting us study, gave men and society an excuse to treat us badly and repress us. That is why I was determined to educate everyone in my family.

It makes me very happy to see every single female in my family from my daughters to great granddaughters with university degrees. They are doing what they love and even choosing their own grooms. Women today are confident, clever, and know what they want in life. It is education that has given them so much confidence and power.

I hated living under the Ranas, there were too many restrictions, some just plain silly. My cousin brother was once sent to jail for wearing a sherwani, a dress that was supposed to be exclusive to the Rana family. He was barely 15. We also had to wear ill-fitting, poorly stitched, handmade leather shoes because there were no other shoes in those days. One of my happiest days was when I slipped into my first pair of comfortable white canvas.

It feels wonderful to be able to talk with my great grandchildren living abroad through the internet and mobile phone. While life today is much easier, simple things that we took for granted back then, like fresh food, clean water are becoming scarce. Oh how I miss eating jeri and swari without having to worry about my stomach. 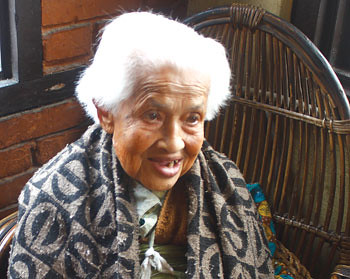 DEVYANI SHIWAKOTI
I grew up in Basantapur, playing in the lush green fields with my six siblings and helping my father at our small grocery shop in Asan. People were happy and healthy even though there were no healthcare facilities. Perhaps it was the clean air and home grown vegetables that kept us fit.

We didn’t have to buy water in those days and neither did we pay money to buy flowers. We used to give rice in exchange of flowers to the sellers. For me the most striking change in these 100 years is how prices have soared. I remember selling my one tola gold bangle for Rs 24 back then. Silver was even cheaper at Rs 1 per tola. What can you get for one rupees today?

My most disturbing yet vivid memory is of the great earthquake of 1990 BS. I lost my younger sister and seven other relatives who were unable to escape on time. Those of us who survived spent countless nights in the big field near Basantapur. Today that field is home to big buildings. It took us months to renovate our house and the walls that we painted then still stands, reminding me of that awful day.

My husband died while I was still a teen so I came to live with my parents to avoid the insults and abuse at the hands of relatives and neighbours. Girls today won’t tolerate such behaviour, they are not afraid to speak their minds and can take control of their lives which is wonderful. I was never sent to school, but my granddaughters and great granddaughters are all educated, this is progress.

As a young girl, I always looked forward to jatras and bhoj where I would dress in my best fariya choli, put on fancy jewellery, and enjoy delicious meals with hundred other relatives under the same roof. We used to bring back the leftovers home, we never threw food away.

Life is easier now, we have all kinds of technology to help us. But once in a while I miss looking at the open green fields, the temples nearby, and the unbroken canvass of the clear blue sky. 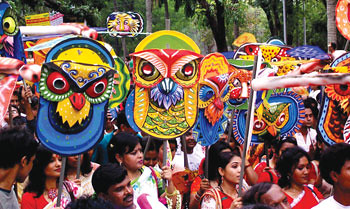 14 April is celebrated as Pohela Boishakh or Bengali New Year in Bangladesh, West Bengal, and Bengali communities across the world. In Bangladesh, young men and women decked in their finest red and white saris and salwars join processions, attend melas, and enjoy traditional Bengali food like Panta Ilish, a dish made of leftover rice and fish. 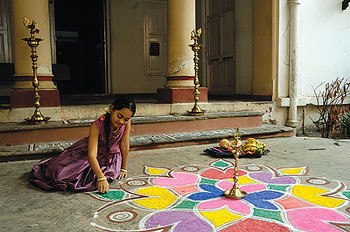 Puthandu is celebrated by Tamils in South India, Sri Lanka, and Tamil-speaking population in Malaysia, Singapore, Mauritius. Like many other South Asian calendars, the Tamil calendar is also based on the classical Hindu solar calendar and begins on 14 April. Large feasts are held and homes are decorated elaborately with kolams, paintings drawn using rice powder, or naturally colored powders. 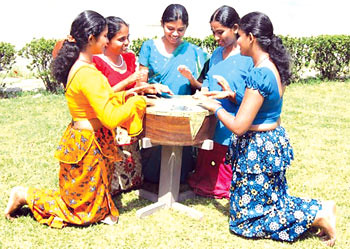 Celebrated by the Sinhalese community in Sri Lanka as well as the diaspora, the new year falls on 13 or 14 April depending on when the sun moves from the House of Pisces to the House of Aries. People clean their houses and light an oil lamp. In some communities, women gather and play Raban or Rabana, a one-sided traditional drum to announce the start of a new year. 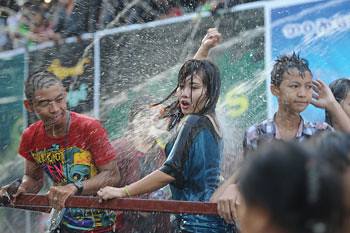 Falling around mid-April, Thingyan is the Burmese New Year which is usually celebrated over four days. Historically, the date for Thingyan was calculated following the traditional Burmese calendar, but today it is based on the Gregorian calendar. One of the major festivals of Burma, Thingyan is also known as water festival. Water cannons and hoses fill the streets of Rangoon, the capital during the festival. Thingyan celebration is similar to Songkran in Thailand, Pi Mao Lo in Laos, and Chaul Chnam Thmey in Cambodia.

The official calendar of Nepal, Bikram Sambat was created to mark the victory of emperor Vikramaditya of Ujjain (in current day Uttar Pradesh) over the Sakas in 56 BC. Post-victory era came to be known as the Vikrama era, but this calendar is more popularly associated with his successor King Chandragupta Vikramaditya.

The Ranas introduced Bikram Sambat in Nepal replacing the Shaka Sambat as the official calendar. Bikram Sambat is also recognised in north and east India and in Gujarat. It is approximately 56.7 years ahead of the Gregorian calendar. You can try converting Nepali date to English using the following formula, although it doesn’t give a precise date, it produces a close result. 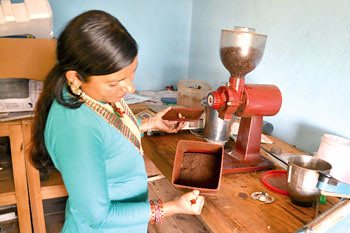 2. Learn a new language (123 languages are spoken in this country)

4. Support Team Nepal at the World Twenty20 qualifier in UAE in November

5. Get out of the Valley (at least once a month) 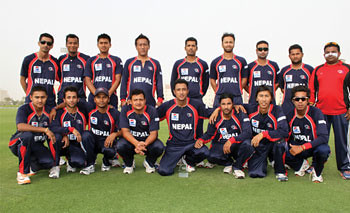 The big three are far from one

Political parties in Nepal continue to compete for patrons outside Nepal, but India is still top dog
CK LAL

How column writing can lead to writing books
ARTHA BEED
Wow! It namely likewise fine treatise about JavaScript, babyliss pro curler I dissimilar Your post doesn't acquaint any sense. ray ban outlet uk if information are defined surrounded sketches one can effortlessly be versed with these. hollister sale I think a visualized exhibit can be better subsequently simply a effortless text, chanel espadrilles for sale that why it gives you improved quality. getnjloan.com Can you amuse forward me the code for this script alternatively interest distinguish me surrounded detail among relation apt this script? Vivienne Westwood online get a babyliss perfect curl Very soon this network sheet longing be outstanding among all blog viewers, isabel marant sneakers saleI too prefer Flash,