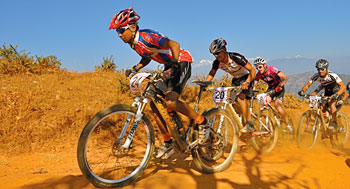 A decade ago, there were a handful of Nepali mountain bikers. It wasn't surprising considering mountain biking is one of the more expensive individual sports in the world. Today not only is the sport incredibly popular as a recreational activity among young Nepalis, but local riders are dominating races at home and a few even abroad, despite the obvious lack of support and resources.

Ajay Pandit Chhetri, current Nepal National Champion and three-time Yak Attack winner and 2013's runner up, won three of the seven races in the UK this year, most recently the Midlands Cross-Country Championships 100-kilometre marathon. In 2011 he placed second in the Trans Wales Mountain Bike Stage Race, the largest in the UK.

Narayan Gopal Maharjan, this year’s Yak Attack winner, last year’s runner up and currently the 2nd nationally ranked rider, has what his coach, Ton Evers, calls “sustained power he has never seen on longer climbs”. On a pre-Yak Attack ride with competitors, his heart rate was 15-20 per cent lower on the climbs than professional riders, meaning he required significantly less effort. This power was on full display as he dominated the field on the way to victory. 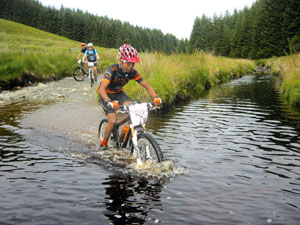 PHIL EVANS/ Extreme World Challenges
Ajay Pandit Chhetri at the Trans-Wales competition in the UK in 2011.

Along with Chhetri and Maharjan there are several younger riders with tremendous potential including Aayman Tamang (3rd place Yak Attack, 4th ranked nationally) and Roan Tamang (5th Yak Attack, 3rd ranked nationally) both of whom are under 20. However, the challenges for Nepali cyclists have remained more or less the same. While international racers have the support of their national cycling federation and race professionally for teams sponsored by companies who gain marketing advantages supporting them, in Nepal even top riders don't have this privilege.

They come from simple backgrounds and lack exposure to the sport during their childhoods. Most start on simple Indian or Chinese bikes with basic gears and brakes and no suspension, working, saving and going into debt to upgrade their bikes. Riders like Ajay and Narayan now have professional bikes because of their hard work and generous donors, but infrastructure and financial support are largely missing. There are few training facilities and qualified instructors and riders mostly pay out of their own pockets for equipment, training, nutrition, and race fees.

Training, however, is not the only issue. To excel at the international level, Nepali riders need a better race culture and greater exposure to a variety of terrains and competitions so that they can build experience. “Training can only take us so far, it’s the actual racing experience that helps us make it to the next level. And for this we need a well-organised, regular local race circuit as well as opportunities to take part in international events,” explains Chhetri.

Recognition of local riders is also limited. Chhetri admits he is more recognised in Europe because of his Yak Attack and European success than he is in Nepal despite being a three-time national champion and Yak Attack winner. Maharjan, Aayman, and Roan lost out on valuable experience on the international race circuit when they were denied visas to the US this year for a two-month race program developed by Yak Attack participant Robert Burnett and supported by US companies.

However, there have been some signs of progress. The Nepal Cycling Association recently received international support for developing riders for the 2016 Olympics in Rio from the Ravenswell Foundation, a Swiss organisation that promotes development through entrepreneurship and sport.

On individual level, Jenny Lama and Santosh Rai who run Himalayan Singletrack, a mountain bike retail store and tour operating company, recently started the first professional mountain bike team in Nepal called Singletrack Team. “We created this team because we wanted to build a public profile of riders to create local interest and get local businesses involved in sponsorship,” say Rai and Lama. “We hope others follow our lead.” As more young Nepalis take up mountain biking, there couldn’t be a better time for corporations to step up and sponsor teams.

To fill the gap in the racing circuit, the Himalayan MTB Cross-Country Cup Race Series was started a month ago by with its first race in June. Five more races are planned and the organisers want to turn it into an annual event.

With their unmatched talent and passion, Nepali riders are more than capable of competing with the world’s top riders. What they need now is increased local support, professional teams and races, along with more opportunities to race internationally. Here’s to Rio 2016 and beyond.

How far is it to Nuntala?

It is the time it takes to realise the soldiers are as frightened as you are, and if you run, they will shoot.

The lure of legitimacy

Lets get one thing straight: Deuba holds office at the pleasure of the king.

"I’ll sue the US government"

When schools become a war zone, the sword is mightier than the pen
NAVIN SINGH KHADKA
Wow! It namely likewise fine treatise about JavaScript, babyliss pro curler I dissimilar Your post doesn't acquaint any sense. ray ban outlet uk if information are defined surrounded sketches one can effortlessly be versed with these. hollister sale I think a visualized exhibit can be better subsequently simply a effortless text, chanel espadrilles for sale that why it gives you improved quality. getnjloan.com Can you amuse forward me the code for this script alternatively interest distinguish me surrounded detail among relation apt this script? Vivienne Westwood online get a babyliss perfect curl Very soon this network sheet longing be outstanding among all blog viewers, isabel marant sneakers saleI too prefer Flash,