"An ecosystem for electric mobility”

Chetan Maini is the founder of Reva Electric Vehicles, India’s first mass market battery-operated car. Two years ago, Reva partnered with the Mahindra Group to start Mahindra Reva. Maini was in Kathmandu this week to launch the new e20 model and spoke to Nepali Times. 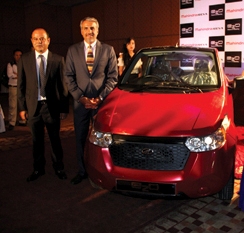 SHOWPIECE: Chetan Maini of Mahindra Reva (right) with Cabinet Shrestha (left) of Agni Group at the official launch of the new model electric e2o in Nepal on 14 August.

Nepali Times: You were originally a solar guy. How did you get into designing and selling electric cars?

Chetan Maini: Actually, I was building toy cars that ran on batteries even as a boy. And I took that passion with me to the University of Michigan and Stanford when I was in a team designing solar-powered cars that came first in a cross-US race. Later, we also took part in the across Australia World Solar Challenge. That is how I came up with the idea of the Reva: to take electric cars into a mass market. And when I visited India, I really felt with rising pollution and petroleum consumption, the country needed an electric vehicle.

But you seemed to be ahead of your time. India wasn’t ready to go electric.

We were too busy with the technical challenge of building an electric car that was lightweight, cost-effective, had a decent range, and could be charged quickly. We knew we were on the right track. The other challenge was to raise money to build 40 prototypes, but we did. The Reva sold 2,000 in Bangalore and there are about 1,200 in London and 4,500 in Norway.

You came to Nepal to try to sell them here too.

Yes I came here in 2002 to explore the market and I am glad to see that there are more than 100 Revas on the streets and from what I hear from the owners they are very happy with the car.

How did the new e20 model come about?

We were always trying to improve the technology, make the car bigger, and extend the range. We had taken the new design to the Frankfurt Auto Fair in 2009 and there were many other electric car manufacturers there. We really felt the time was right to come up with a design for the future of mobility. It wasn’t just about reducing emissions but eliminating them completely not just in the running of the car, but in the manufacture as well.

You have chosen Nepal to be your first international market for the e20. Why so?

Well, the previous model has been received well, the market has matured. Petroleum is scarcer and more expensive, Nepal faces the same challenges as we do in India in terms of pollution, traffic, and petroleum dependency. Also, the new model is perfect for city driving in a place like Kathmandu which has been a test track for Revas in more ways than one (laughs). But for us it’s not just about selling one brand, it is about working with customers and the government on creating an ecosystem for cars that run on renewable energy and with Mahindra’s network in Nepal we have that opportunity to expand the market for electrics.

Why did you decide to partner with Mahindra?

It was a perfect fit. We were strong in technology, we had a new model that was a game-changer. And Mahindra had the distribution network, technological backup, the financing, and was also on the lookout for an electric solution to all its platforms from 2-wheelers to 16-wheelers. The new green plant we have put up in Bangalore to build the e20, for instance is 35 per cent powered by solar energy and every new car first gets a charge from solar panels. Reva Mahindra plans to build 30,000 e20 vehicles there in the coming year.

What can governments do?

Government policy is crucial in making EVs more accepted. An electric vehicle may cost a little more, but its running cost is up to 10 times less. The Indian government introduced incentives in this year’s budget and state governments have also announced subsidies. All this will boost demand. Government needs to look beyond tax revenue and calculate what it will save in the long-term in the petroleum import bill.

The Jazzers in 'Mandu

The jazzy crowd of this year's Surya Nepal Jazzmandu has arrived in town.

If you are parking at your own risk, what are you paying for?
PAAVAN MATHEMA
Wow! It namely likewise fine treatise about JavaScript, babyliss pro curler I dissimilar Your post doesn't acquaint any sense. ray ban outlet uk if information are defined surrounded sketches one can effortlessly be versed with these. hollister sale I think a visualized exhibit can be better subsequently simply a effortless text, chanel espadrilles for sale that why it gives you improved quality. getnjloan.com Can you amuse forward me the code for this script alternatively interest distinguish me surrounded detail among relation apt this script? Vivienne Westwood online get a babyliss perfect curl Very soon this network sheet longing be outstanding among all blog viewers, isabel marant sneakers saleI too prefer Flash,