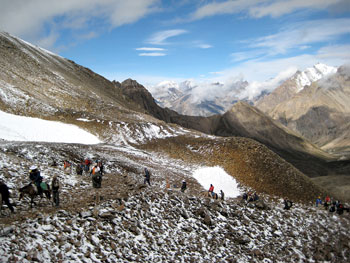 The catalog of epidemiological research on high altitude sickness almost exclusively documents its effects on trekkers and climbers, but research on other groups, especially pilgrims, is missing.

Epidemiological studies about altitude sickness on Himalayan trekkers, as well as climbers in the US, the Swiss Alps, Aconcagua in Argentina and Kilimanjaro in Kenya demonstrate a relatively high incidence of about 50 per cent of acute mountain sickness (AMS), the benign form of the disease; but generally a low incidence of about one per cent of the life-threatening forms of high altitude pulmonary edema (HAPE) and high altitude cerebral edema (HACE)is evident.

Historically however there is one group where the HAPE and HACE rates were as high as 15 per cent—Indian soldiers. They were air-lifted from sea-level in Delhi during the 1962 India-China border war to about 5000m near the Ladakh area to fight against the Chinese. The Chinese were well versed at carrying out high altitude skirmishes against the Tibetans. In addition the Indian soldiers exerted themselves unnecessarily in the first few days of arrival, and were dressed for summer, not the cold mountains. There is no question that altitude sickness determined the outcome of that war.

An important group that is consistently underrepresented in altitude sickness studies is pilgrims. In numbers alone the pilgrims are probably the largest group that ascend to high altitude. High altitude pilgrimage sites in the state of Uttarakhand in India like Kedarnath and Badrinath at over 3000m sees over 3 million pilgrims every year. Yet altitude sickness epidemiological data on this group is almost non-existent.

The pilgrims have important differentiating characteristics. The pilgrims are primarily older, poorer, sicker than trekkers, less literate and inclined to suffer from hypothermia due to a lack of availability of warm clothing. Well over 100 pilgrims died in 2012 during the Shri Amarnath Yatra at about 4000m mostly due to hypothermia and altitude sickness.

The most crucial differentiating feature of the pilgrims may be they are more fatalistic and resigned to the outcome of their higher risk factors than trekkers. In fact this resignation often makes it difficult to organise a rescue on their behalf when it is appropriate.

The lack of education of the ill effects of low oxygen (hypoxia) cause even healthy pilgrims to fall victim to severe AMS, HAPE or HACE. Now that the pilgrimage season is here to go to places like Kailash and Manasarovar in the neighborhood of 5000m in Tibet, it is prudent to learn more about altitude sickness.

In a 2012 large epidemiological study Jean-Paul Richalet and his colleagues examined risk factors for severe altitude sickness in trekkers once again. Rapid ascent of greater than 400m per day at high altitude, prior history of altitude sickness, young people who did regular physical activity meaning they “pushed” themselves excessively, participants with a history of migraines and those traveling to Ladakh in India were all more prone to the illness. Why trekkers to Ladakh suffered more from this illness than those doing the Annapurna circuit in Nepal was a mysterious finding.

Ganga and Jamuna are back and well. Dr BASANT PANT gives us a blow-by-blow account of this heartening medical advance .
Wow! It namely likewise fine treatise about JavaScript, babyliss pro curler I dissimilar Your post doesn't acquaint any sense. ray ban outlet uk if information are defined surrounded sketches one can effortlessly be versed with these. hollister sale I think a visualized exhibit can be better subsequently simply a effortless text, chanel espadrilles for sale that why it gives you improved quality. getnjloan.com Can you amuse forward me the code for this script alternatively interest distinguish me surrounded detail among relation apt this script? Vivienne Westwood online get a babyliss perfect curl Very soon this network sheet longing be outstanding among all blog viewers, isabel marant sneakers saleI too prefer Flash,