As Election Day draws closer, candidates are trying to outdo each other in wooing swing voters, and win power 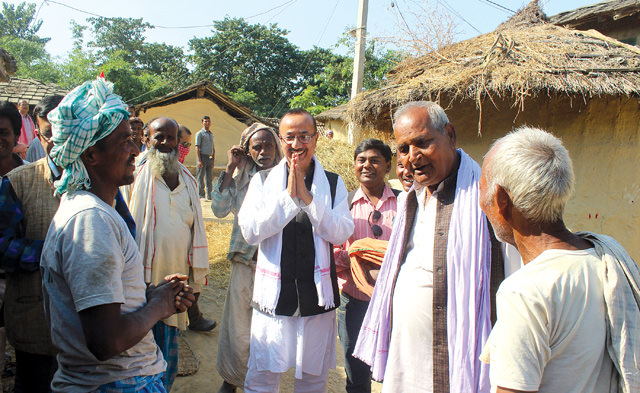 By successfully holding the first phase of parliamentary and provincial elections early this week, and gearing up for the last phase next week, Nepal is now on the final lap leading to full promulgation of the new Constitution.

As Election Day draws closer, candidates appear to be growing anxious and are doing — or promising — anything that voters might want to hear. They are trying to outdo each other in wooing swing voters, and win power.

This week, a rightist group advocating for restoration of Nepal as a Hindu nation held separate meetings with NC President and Prime Minister Sher Bahadur Deuba and UML Chair KP Oli. Both leaders reportedly promised to address the outfit’s concerns, hoping to win its support.

In Parsa district’s constituency 3, where people suffered a devastating flood in August caused by Indian embankments, voters asked NC parliamentary candidate Ramesh Rijal if he would be able to raise the issue with India’s Prime Minister Narendra Modi.

“Why not?” he replied, folding his hands and flashing a smile to greet voters.

Most voters are smart enough to figure out if their candidates are lying. And contenders also know that their empty promises will not really work — so some candidates are even distributing cash, booze and goods.

In the Marchwar area of Rupandehi district this week, police seized a truckload of booze being smuggled into Nepal probably by a candidate to woo gullible voters. In Bhairahawa, UML supporters accused RPP candidate Dipak Bohara of erecting electricity poles at his own expense to influence voters — a charge refuted by the RPP.

Former Chief Election Commissioner Nilkantha Uprety urges people to choose candidates wisely, as their decisions could be instrumental in shaping the country’s future.

“Voters should realise that they are also partly responsible for bad governance,” he says. “So they have to vote for parties and candidates who can safeguard democracy, bring prosperity and deliver stability.”

He adds: “If the voters fail, the country will fail too.”

Get a glimpse of the inroads the 21st century is making in Nepal.
GAURAB RAJ UPADHAYA

"Tourism promotion must not be Kathmandu-centric."

Jana Ekata, 21 January
Wow! It namely likewise fine treatise about JavaScript, babyliss pro curler I dissimilar Your post doesn't acquaint any sense. ray ban outlet uk if information are defined surrounded sketches one can effortlessly be versed with these. hollister sale I think a visualized exhibit can be better subsequently simply a effortless text, chanel espadrilles for sale that why it gives you improved quality. getnjloan.com Can you amuse forward me the code for this script alternatively interest distinguish me surrounded detail among relation apt this script? Vivienne Westwood online get a babyliss perfect curl Very soon this network sheet longing be outstanding among all blog viewers, isabel marant sneakers saleI too prefer Flash,