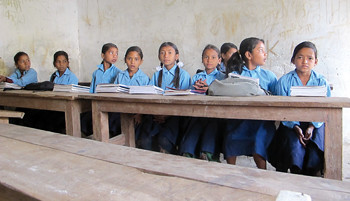 KUNDA DIXIT
Twenty of the world’s most fragile states, including those currently affected by conflict, have achieved one or more of the development targets outlined under the Millennium Development Goals (MDGs), the World Bank has said.

In a new paper, bank researchers offer findings that six more states are on track to meet individual development targets ahead of the MDG’s 2015 deadline.

“This should be a wake-up call to the global community not to dismiss these countries as lost causes. These signs of progress do signal that development can and is being achieved, even amid fragility and violence,” World Bank President Jim Yong Kim said last week.

The findings indicate significant improvements from a 2011 World Bank report that suggested that no low-income, fragile or conflict-affected country had achieved a single MDG, the eight international development goals, established in 2000 to which all 193 United Nations member states agreed to a deadline for achievement by 2015.

According to the new report, the greatest progress has been on gender parity in education, the ratio of girls’ to boys’ enrolment in school. The analysis finds that eight fragile and conflict-affected states (including Guinea, Nepal, Bosnia and Herzegovina, and Timor-Leste) have already met the goal to halve ‘extreme poverty’, those living on less than $1.25 a day.

“The message that we feel these findings send is that these nations can achieve and make progress in many of the areas associated with the MDGs,” said Joel Hellman, director of conflict and fragile states at the World Bank. He adds that the new numbers reflect both progress and better data-gathering and analysis on the part of the World Bank and the United Nations.

“We can’t make policies without information and the MDGs have really galvanised countries and the international communities to support getting information to assess what is happening on the ground,” he says. Still, Hellman cautions that there is a long way for these countries to go, noting that few of them will accomplish many more of the MDGs, with just 1,000 days left until the deadline passes. Further, these signs of success are in volatile countries, meaning that this progress could quickly be reversed.

Others suggest that this data could inadvertently paint an unduly rosy picture – and one that may not be filtering down to all of a country’s inhabitants.

“Countries are now in the midst of this global recession, facing really desperate conditions, so even in places where you have growth, this growth is coming primarily from extractive industries, particularly oil, gas, and mining,” says Emira Woods, co-director of Foreign Policy in Focus at the Institute for Policy Studies, a think tank here.

“So the successes on this list only represent the ‘one percent’, the elites who are benefiting. For the World Bank to highlight that these countries are meeting at least one of the MDGs seems a bit superficial – remember, there are eight goals.”

Woods notes that countries of the global South need a role for government to determine their paths towards development and she worries that the foreign direct investment-focused development model pushed by multilateral lenders has been shown to be detrimental to many developing economies.

“Foreign direct investment is mainly directed at extractive industries and does not take into account environmental damage, worker’s health and rights, and the long-term cost for future generations,” she says.

“What we have seen is that this model for development continues to concentrate wealth in very few hands – often local elites – while large multinational oil, gas, and mining companies benefit from an unregulated market where the role of government is kept out. Unless you change the fundamentals of those policies, countries will not be able to cut poverty in half.”

The alternative, she says, would create the space for national governments in developing countries to more actively choose their own development paths. This would include ensuring that those countries maintain the ability to protect particularly valuable sectors.

Countries with large rural populations and agriculture potential, for instance, need to be able to focus on creating opportunities for smallholder farmers to maintain their livelihoods.

Elinor Ostrom, the winner of the Nobel Memorial Prize for Economic Sciences, speaks about Nepal's success in getting communities to manage its resources

Events and eateries this week

Rakesh Sood could have been more diplomatic, but he is not to blame for Indian policy on the Maoists
PRASHANT JHA
Wow! It namely likewise fine treatise about JavaScript, babyliss pro curler I dissimilar Your post doesn't acquaint any sense. ray ban outlet uk if information are defined surrounded sketches one can effortlessly be versed with these. hollister sale I think a visualized exhibit can be better subsequently simply a effortless text, chanel espadrilles for sale that why it gives you improved quality. getnjloan.com Can you amuse forward me the code for this script alternatively interest distinguish me surrounded detail among relation apt this script? Vivienne Westwood online get a babyliss perfect curl Very soon this network sheet longing be outstanding among all blog viewers, isabel marant sneakers saleI too prefer Flash,