What will the elevation of a Hindutva hawk do to his country, and how it will impact on Nepal? 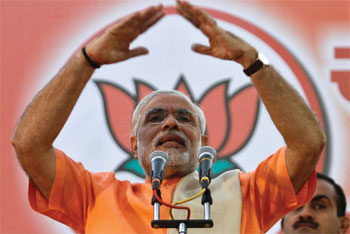 GG2.NET
As it becomes ever-clearer that Narendra Modi will be the next prime minister of India, questions abound as to what the elevation of the Hindutva hawk will do to his country, and also how it will impact on Nepal. On India, unless Modi unexpectedly turns benevolent upon entering 7 Race Course Road, one can expect a further build-up of societal acrimony as the high-caste, hard-line agenda defines discourse, governance and geopolitics.

There are many ways a Modi administration could affect Nepal, from the cross-border capillaries to Singha Darbar and the Constituent Assembly. This is a country that has opened itself up so wide to external influence that one hopes Modi’s plans do not require Nepal as a prop for any purpose.

As sometimes happens with radicals once they enter office, the responsibilities of governance may modulate Modi’s activism. The Gujarat Chief Minister comes from so far to the right, however, and his mentor-organisation, the Rastriya Swayamsevak Sangh (RSS), is so keen to dig in that the move to the centre will take time, if it happens at all. His loyalty to the RSS seems total, as confirmed in a tv interview on Wednesday: “I learnt to work hard from the Sangh … I owe it all to the RSS.”

Modi’s war chest is bursting at the rivets, filled by corporate India from the Ambani brothers on down, and the print and electronic media is glad for his top-up. In column inches and airtime, Modi leaves the others far behind. He has crafted a masterful election campaign, spending lavishly on lighting, sound and projection at rallies.

Modi’s outreach ranges from patriotic jingles (sung by Udit Narayan Jha) to mass-scale cellphone texting. The orange-blue campaign colour combination is fetching, and Modi watches you from everywhere on the roads, out of banners and billboards. On social media, he is said to have an IT battalion that pounces on anyone who dares criticise ‘NaMo’.

The candidate’s oratory is harsh and accusatory. The campaign promises a ‘Modi sarkar’ rather than a BJP government, and within the party Modi is pulling no punches as he dictates to his peers and monopolises the appointment of candidates. Modi uses Pakistan to bait adversaries, he exaggerates his role in Gujarat’s economic transformation, and political Hindutva is the battering ram of his strident campaign. The strategy for the all-important Ganga heartland is epitomised by the presence of Yogi Adityanath, the fire-spewing, Muslim-baiting mahant of Gorakhnath Temple, who leads Modi’s charge in eastern Uttar Pradesh.

Many in Hindi-speaking northern India seem to be looking forward to a Modi win. The RSS and Sangh Parivar are already jubilant and planning to consolidate during ‘Modi raj’ by placing cadre and fellow travellers in state institutions, from the universities to commissions and public sector enterprises. 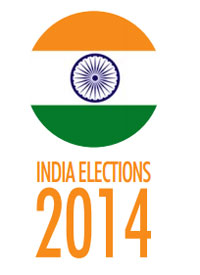 The competing parties seem unable to effectively counter the Modi bandwagon. The Congress is adrift and open to ridicule, its underbelly soft after a decade in power leading the UPA coalition. Prime Minister Manmohan Singh’s reticence contrasts with the fiery Modi, and Rahul Gandhi the Anointed’s lacklustre performance in a January interview with TV hotshot Arnab Goswami served to de-animate the Congress rank.

Arvind Kejriwal of the Aam Aadmi Party has been a master tactician, but his resignation as New Delhi chief minister after barely 49 days in office is seen as abandonment by many voters. As for the communists – the photograph showing the glum gentlemen of the CPM releasing their election manifesto on 20 March said it all. In the end, it may be the ‘regional ladies’ (Mayawati, Mamata and Jayalalitha) who will blunt Modi’s strike, whether in opposition or in coalition.

Is it possible to decelerate the Modi chariot? While the middle-class adult northern Hindu males are bedazzled by the chief minister’s promise of economic growth, the poorer mass including the Dalit may not entirely buy that or the Hindutva agenda. The women voters of India may hold a more nuanced view on Modi than the menfolk who form opinion.

If there is an electoral upset that defies the psephologists, it will be because the BJP campaign is all about Modi the man and not BJP the party, its policies and programs. And the memory of the riots of 2002 in Gujarat, the killing of Muslims, may finally emerge with some strength at the ballot box.

If it is inevitable that Modi will lead the government, the ideal would be a coalition that blocks his adventurism and restrains the RSS sledge hammer. Perhaps the professional bureaucracy of India – starting with North Block and South Block – will also play a role.

Rather than fret over how Modi’s Hindutva-laced ultra-nationalism will affect Nepal, it is better for Kathmandu to put its house in order and for the polity to emerge capable of setting its own priorities and taking its own decisions.

The vote in Varanasi, AJAZ ASHRAF

Former Justice of the Supreme Court, Krishna Jung Rayamjahi. Deshanter, 5 January
Wow! It namely likewise fine treatise about JavaScript, babyliss pro curler I dissimilar Your post doesn't acquaint any sense. ray ban outlet uk if information are defined surrounded sketches one can effortlessly be versed with these. hollister sale I think a visualized exhibit can be better subsequently simply a effortless text, chanel espadrilles for sale that why it gives you improved quality. getnjloan.com Can you amuse forward me the code for this script alternatively interest distinguish me surrounded detail among relation apt this script? Vivienne Westwood online get a babyliss perfect curl Very soon this network sheet longing be outstanding among all blog viewers, isabel marant sneakers saleI too prefer Flash,