Did New Delhi ever imagine that its coercive strategy would backfire this badly? 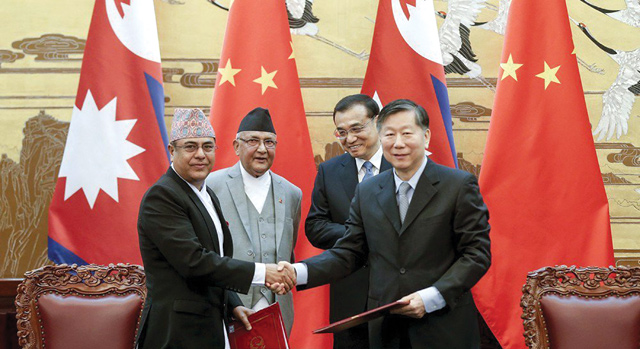 It was the five-month blockade by India that provided Nepal’s political class with the daring to sign the deal in Beijing on Monday. Without the public opinion created as a result of that thoughtless adventurism, no leader, including KP Oli, would have gone the distance in inking the 10 agreements on transit, transmission lines, highways, railways, banking, etc.

The enthusiastic language of Wednesday’s 15-point joint communiqué, replete with unusual terms like ‘remarkable’, ‘synergy’ and ‘momentum’, and China’s support for the new Constitution, were in sharp contrast to the studied expressions of the Indian authorities during Prime Minister Oli’s visit to India last month.

It has suddenly become possible to talk to China as Nepal does with India after decades of running scared. The very term ‘connectivity’, used with such earnestness by Indian diplomats such as former Foreign Secretary (and Nepal ambassador) Shyam Saran is now being applied on the trans-Himalayan sector.

Ironically, India itself stands to benefit for having pushed Nepal into China’s embrace, because the development of trans-Himalayan linkages opens up possibilities not just for Nepal but both the giant neighbours. The consternation evident in New Delhi over the Nepal-China bhai-bhai atmospherics is a holdover from the past that does not do justice either to Nepal’s sovereign agency, nor India’s own rapidly evolving economic relationship with China.

Much of Delhi’s disquiet actually emanates from outdated strategic paranoia about the Himalaya that harks back to the defeat in the 1962 war. This mindset continues to regard the Himalayan ridgeline as a security barrier, using unconscionable pressure over the decades to block infrastructure development in Nepal.

If the panicked commentators in New Delhi would read a bit of history, the new opening to the north is actually a continuation of trans-Himalayan commerce that was pioneered by Kathmandu traders in Lhasa, at times even with powers of extra-territoriality.

The ten agreements now have to be converted into reality through protocols and diligent follow-up. Beijing itself is said to have been exasperated over the decades by the diffidence of a Kathmandu’s ruling class fearful of Indian reaction.

It would be important for New Delhi to hold off this time and allow Nepal to proceed with the agreed-upon projects and programs. Indeed, both New Delhi and Beijing should trust Kathmandu to not allow activities inimical to their interests out of Nepali soil, while for their part they should desist from making demands that would make Nepal a closed society.

The agreement on transit rights is the most significant, and will help transform modern Nepal from being ‘India-locked’ to truly ‘landlocked’, with now the possibility of reaching third countries through the north. Certainly, the nearest port city of China is three times the distance from Calcutta, and the northern route may not see much use, but at the very least it will dissuade those who would want to use blockades as instruments of geopolitical coercion in the future.

No country can be expected to be excessively altruistic, and Nepal need not be too beholden to Beijing because China, including the Tibetan Autonomous Region, is sure to benefit in full measure from the agreements signed. If Nepal needs connectivity to the north, China too would benefit from crossborder transmission lines and the Kimathanka Highway (once built) for quick access to the sea as alternative to the Nathu La and Jelep La in Darjeeling/Sikkim.

Much of the possibilities to the north depend on the viability of transport of goods by rail. The Qinghai-Tibet Railway from Beijing via Golmud has already arrived in Xigatse and is ploughing westward across the Changtang plateau along Nepal’s northern frontier. President Xi Jinping’s ‘One Belt One Road’ initiative relies on trans-continental transport of goods by rail being competitive with maritime shipping. If railway carriage turns out to be affordable, then Nepal stands to benefit immensely – through bilateral trade, third-country transit through China, as well as entrepot trade between India and China.

For now, the advantage of the transit agreement is strategic, with its guarantee of an alternative route to the world economy. It also carries the possibility of loosening Indian attitudes towards transit through Indian ports, as well as access to Mongla and Chittagong ports in Bangladesh.

If economic and infrastructural connectivity is truly the agenda of New Delhi as well as Beijing rather than a camouflage for strategic penetration, then both should look at the great opportunities that Nepal holds for market synergies. If what New Delhi analyst Suhasini Hyder writes is borne out, that “connectivity is the coinage for power in the future”, then Nepal as the country connecting the Middle Kingdom with the Ganga plains stands to gain.

Without exaggerating what has been achieved, a trigger was required for Kathmandu to dare to reach out for deals with Beijing. India activated that trigger with its blockade, and one may thank New Delhi strategists for what is clearly a result of unintended consequences.

Unless the government acts quickly, last weeks riots will have a long-term impact on Indo-Nepal trade and investment.
BINOD BHATTARAI

All the king’s (new) men

Flying into the past with Hardy Fuerer

The pilot who helped build airstrips all across the remotest parts of Nepal 20 years ago returns to remember the good old days.
KUNDA DIXIT
Wow! It namely likewise fine treatise about JavaScript, babyliss pro curler I dissimilar Your post doesn't acquaint any sense. ray ban outlet uk if information are defined surrounded sketches one can effortlessly be versed with these. hollister sale I think a visualized exhibit can be better subsequently simply a effortless text, chanel espadrilles for sale that why it gives you improved quality. getnjloan.com Can you amuse forward me the code for this script alternatively interest distinguish me surrounded detail among relation apt this script? Vivienne Westwood online get a babyliss perfect curl Very soon this network sheet longing be outstanding among all blog viewers, isabel marant sneakers saleI too prefer Flash,