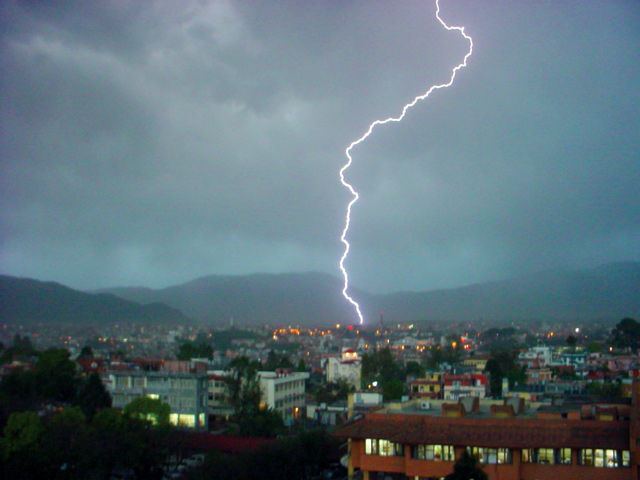 When it started raining on a stormy afternoon last week, workers at a brick kiln in Chitwan district ran under a tree for shelter. Lightning struck the tree, killing two and injuring nine of them.

Nepal’s storm season got to a deadly start, and Dinesh Majhi, 13, and Rita Rai, 24, became the first fatalities from lightning this year. They are unlikely to be the last.

More than 100 people are killed by lightning in Nepal every year, with most of the fatalities in the pre-monsoon season. Thunderbolts have killed 547 people in the last five years, higher than any other natural calamity barring last April’s earthquake. Not even floods or landslides kill as many people, and government figures show the numbers are rising every year.

The Ministry of Home Affairs has been recording deaths caused by lightning since 2000. From 2010, the number of lightning fatalities has started exceeding 100 every year. One reason for the increase could be more accurate reporting of deaths due to lightning after the setting up of the National Emergency Operation Centre (NEOC) six years ago.

However, there also appears to be a correlation between the frequency and intensity of storms and global warming. Says climate scientist Ngamindra Dahal: “It is not just that we have been recording lightning fatalities more actively now, they are indeed increasing and getting more deadly because of the increasing intensity of storms.”

A 2014 report in the journal Science states that lightning strikes are likely to rise by 50 per cent in the US within this century if global warming continues at the current rate. Nepal’s location on the southern slopes of the world’s highest mountains means it could get worse here.

“Nepal is not just mountainous, but it is also a region over where cold air from the northwest collides with rising hot air from the southwest during the pre-monsoon generating more lightning than elsewhere,” Dahal explains.

The other factor is the lack of accurate weather forecasting, as well as insufficient public awareness about what to do when an electrical storm hits.

Government data shows that lightning strikes are more common in central and eastern Nepal than in the west (see map) with most fatalities in Makawanpur district southwest of Kathmandu. As many as 23 people have been killed by lightning in this district in the last two years alone. Interestingly, Kathmandu Valley has had no reported deaths due to lightning in the past two years.

Suresh Dhungel of National Academy of Science and Technology explains: “The fact that lightning kills so many people in Makwanpur but none in nearby Kathmandu is proof that awareness is key to saving lives during storms.”

Dhungel has been analysing the pattern and intensity of lightning strikes to forecast violent and potentially deadly electrical storms. He adds: “We have myths about lightning, but not much scientific knowledge about it.” Besides public awareness, Dhungel says a stricter building code is needed with lightning detection and protection system, especially in rural areas.

Factors that make Nepal the country with one of the highest annual fatalities per capita from lightning strikes: